We cordially invite you to the pre-auction exhibition, opened in our gallery from the 2nd November.

As per tradition, the selection for auction assembles a truly remarkable, broad collection of high quality representing the Czech art scene of the nineteenth and twentieth centuries, ranging from August B. Piepenhagen, Václav Brožík, Antonín Procházka, Emil Filla, Jindřich Štyrský, and Toyen, and extending to contemporary artworks by Robert Piesen, Jaroslav Róna and Theodor Pištěk.

Aiming for record prices among auctioned Czech paintings of the year 2015 is a number of exceptional works of museum quality. Members of the Osma group are present as always; however, this time it is a rare occasion to have the three leading figures – Bohumil Kubišta, Emil Filla and Antonin Procházka. A unique, rediscovered painting Třešňový květ (The Cherry Blossom) by Antonin Procházka is a masterful example of the artist’s idiomatic painterly style on the border of international futurism and orphism. The staring price is CZK 6.5 million. Emil Filla’s art is illustrated by three works, of which the earliest Pařížské zátiší (The French Still Life) from 1914 is an exceptional example of analytical cubism, demonstrating an utter peak of the painter’s career.  For many decades inaccessible and to the highest degree valuable, an exquisite expressionist early work of Bohumil Kubišta from 1908 Riegrovy sady (Rieger’s Garden’s) is offered to art admirers for 9 million crowns.

An extraordinary piece and exponent of supreme Czech surrealism are an early masterful double-sided oil painting by Jindřich Štyrský, as well as a brilliant, enchanting canvas by the painter Toyen Na počátku ticho (Silence was the Beginning) representing European post-war surrealism at a starting price of 6 million crowns.

Czech modernism has a traditionally strong presence. Importantly, Zrzavý’s top-ranking canvas with the motif of beloved Venice from his great period in the thirties in a rare large format is on offer starting at 4.5 million crowns. The playful painting Děti u domu (Children by the House) fully epitomizing the optimistic worldview of Josef Čapek will be offered to collectors for 3.5 million crowns. Above the one-million-crown threshold are reaching two early canvases by Karel Černý as well as by Václav Špála, the latter typically present at the Kodl Gallery auctions.

The Czech nineteenth century is introduced by Jakub Schikaneder’s large-scale work Soumrak (Dusk), a developmental break-through and thanks to the author’s recent exhibition accessible once again, starting at 4.8 million crowns, or the otherwise frequently published and exhibited canvas Chalupa na Okoři (A Cottage at Okoř) done by one of the most prominent Czech landscape painters Antonín Slavíček. Enthusiasts of nineteenth century art should not miss the large-scale lovely portrayal of the countess of Průhonice Marie Antonie Sylva-Taroucca by the master of Czech realism Václav Brožík.

Post-war art is represented by the spiritually rich and museum-worthy Robert Piesen’s Obraz (Picture) - the author’s crucial work starts at 800 000 crowns – Jan Merta‘s large-scale piece Schránka (Envelope), a superb piece by Václav Boštík and an early, formally brave, grotesque work Milenci (Lovers) by Jaroslav Róna. Collectors, investors and the public will certainly appreciate the hyperrealistic painting by Theodor Pištěk, the highest-selling living Czech artist, in which the artist replaced on a rare occasion the favoured brand Porsche with the legendary automobile Enzo Ferrari.

Over 450 works of art at a record total starting price of over 100 million crowns will be on offer to collectors. The total value of proceeds of the first ten items will be donated to the fundraising account of Centrum Paraple, same as at the previous auction. The auction day will take place on Sunday, 29th November, from 1pm, traditionally at the Large Hall (Velký sál) at Palace Žofín in Prague. 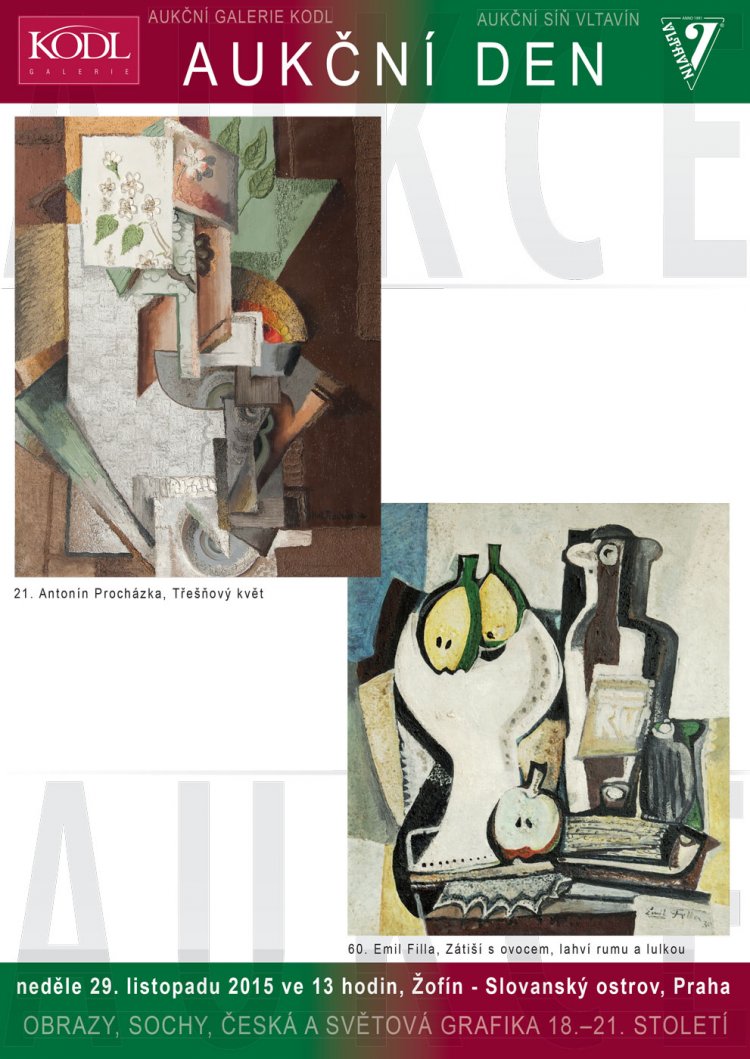