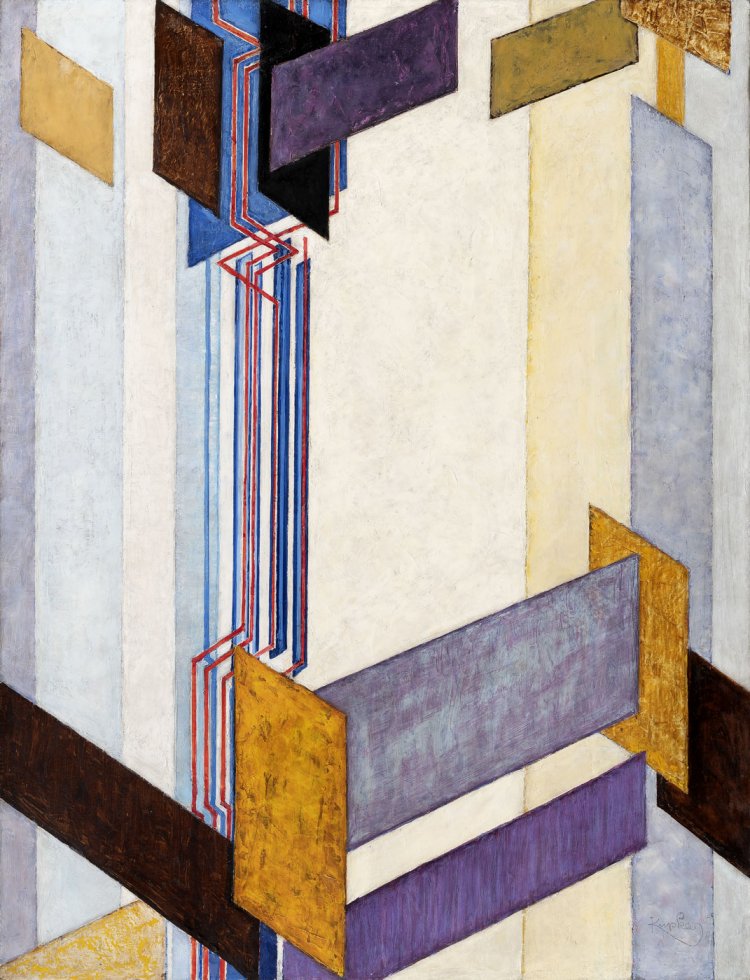 This unique painting by František Kupka is one of the most significant works that has ever appeared on the art market and is undoubtedly one of his most important creations. It is a stunning example of the progressive artistic language that Kupka achieved in the early 20th century and which greatly overtook the development of world painting. From his native Opočno and the saddlery workshop he worked in, he very quickly worked his way up to the Academy in Prague and later in Vienna. He became drawn to the occult and mysticism, creating images with a symbolic theme, canvases full of the magical power of allegorical topics. In 1895 he won a scholarship for his artistic talent and went to Paris, where he continued to study and made a living creating posters and illustrations. Gradually his interest in modern art, especially in futurism, developed. Soon he was creating pictures in the spirit of orphism, through which he tried to capture not only shapes, but also sounds, light and impressions. He became a pioneered of this direction, but soon began experimenting with colour spectra and came up with completely abstract shapes. His Amorpha. The two-colour fugue, which he exhibited among cubists at the Autumn Salon in 1912, was the result of his long-term journey from realistic to non-figurative painting and overtook by far the later development of abstraction. After many years in a private collection, we again have the opportunity to see the Plans diagonaux II, a work of world importance. While in the collections of the National Gallery in Prague there is a much presented and exhibited painting from the same year - the Plans diagonaux I - this related canvas is unique due to its rediscovery. It is an excellent example of pure geometric abstraction, which Kupka developed thanks to his introspective approach to constructivist tendencies. His reflections on the supporting properties of colour resulted in an assembly of vertically constructed lines and surfaces. The plans in an unspecified space run on three main vertical lines and facea silent, demonstrative struggle with horizontally laid bodies. The fragility of colour and artistic execution only enhances the deep theoretical context of this whole painting, which has become one of the fundamental milestones of Kupka's search for the possibilities of abstract artistic language. Kupka donated the painting to his Prague friend, in whose family collection it was until now. It was exhibited several times, for example at a solo exhibition of František Kupka's work in Prague's Mánes in 1946, after which it was given to the above mentioned private collection, or in the Wallenstein Riding School in 1968, where it was reproduced in black and white in the exhibition catalogue (Fig. 71a). The painting was included in the inventory of Kupka's work compiled by Ludmila Vachtová as an annex to Kupka's monograph (Odeon 1968, cat. no. 187, p. 109 under the title Diagonal Plane II). Assesed during consultations by prof. J. Zemina and PhDr. E. Havlová, curator and author of the exhibition catalogue František Kupka – Legionnaire and Patriot (Kampa Museum, 6. 10. 2018 – 27. 1. 2019). The work will be included in the forthcoming monograph by doc. PhDr. M. Theinhardt, CSc., and P. Brullé. From the attached expertise by PhDr. K. Srp: "[...] The painting is original not only thanks to its spatial concept, but also its graded colour solution, which, on the principle of the golden ratio, places red and blue in the center of the composition, accompanied by purple and dark brown, turning light beige in places. The Plans diagonaux II is one of the most impressive abstract paintings Kupka painted. [...]".   Authorized report by PhDr. M. Kodl also attached.