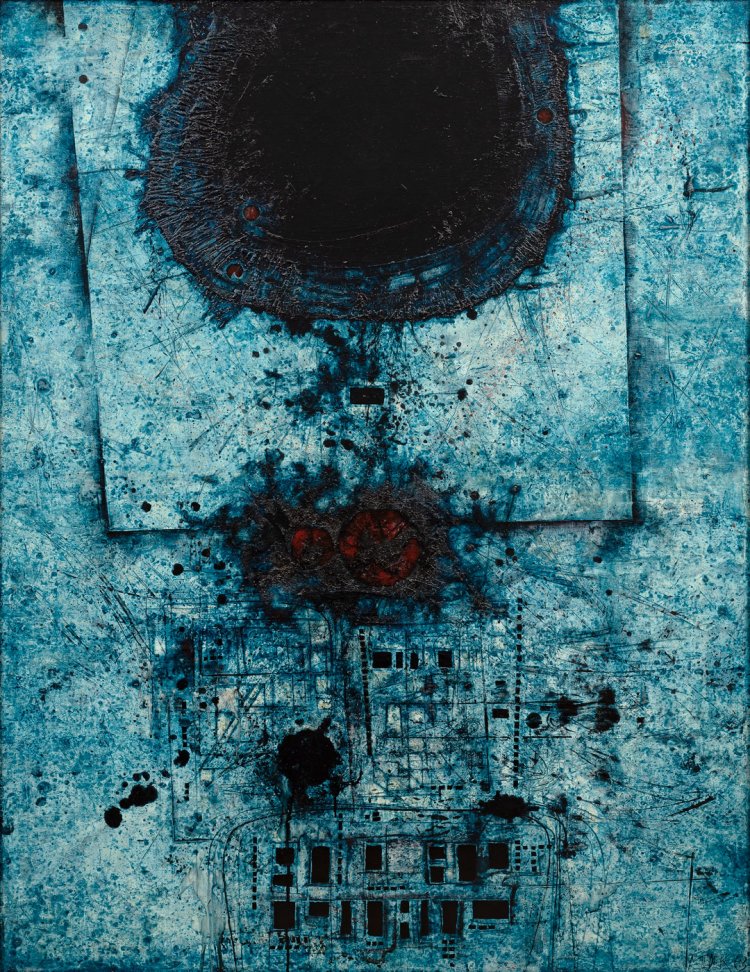 This top, highly imaginative work is a masterful representative of the author's peak period of creation. The work of Mikuláš Medek, one of the most important personalities of Czech post-war art, reflects the artist's absolute need to transfer his own feeling to the surface of the canvas. In addition to oil Medek soon began to use enamel, which allowed him to interfere more brutally with the mass of the painting. The work Collapsed Signal belongs to an important cycle of signals that the author began to create in the early 1960's, when he gradually disposed of figurative motifs in his canvases, and which fundamentally shifted his work to a new position, strongly connected with the viewer. The richly structured surface texture reflects the restlessness of one's own life, and the signals, with their spatial openness, feel like a dramatic appeal. The Collapsed Signal reflects a composition typical of this cycle: a bulky circular object at the top, sinking deep in its center into the black interior, from which a tangle of smaller shapes and spots emerges into the lower half. However, unlike many others in the signal cycle, Medek added two red cores to this canvas. Creating the painting on the basis of blue and red was considered unique by the author. The obscured red spheres originate in the tiny tears rotating around the upper black hole, escalating the already drastic and expressive nature of the whole image. This deeply concentrated work is highly valuable from a collector's point of view and significantly expands the well-known register of Medek's signals. The painting comes from an important Prague collection. Assesed during consultations by prof. J. Zemina and PhDr. Eva Kosáková-Medková, an art historian and the artist's daughter. From the attached expertise by PhDr. K. Srp: "[…] Medek liked to work with a similar polarity, which is clearly reflected in the painting the Collapsed signal. Its name expresses the movement that takes place on the surface of the painting. The large dark circle is on a separate surface, which seems to slide into the painting from the upper frame, while at the bottom its edge is cut into by two smaller red signals forming a meaningful center of the canvas. The painting is permeated by a great sensitive tension. It is outstandingly elaborated from the rings, which develop into a considerable width, to the number of small linear interventions on the blue surface, which at the bottom create a dense field of rectangular, dark holes that open up into other interiors. […] “).