The Pitcher and a Flute

This extraordinarily rare painting comes from one of Filla's strongest creative periods, in which he was at the peak of his artistic capabilities and was able to move in such a wide range of expression that practically every work from this time is significant. The unusually elongated still life, which with its panoramic format reminds one of Filla's late landscapes from the Bohemian Central Mountains, was created in Holland, where the painter and his wife took refuge from France after the outbreak of the First World War. The way in which Filla penetrated to the core of cubism and continued to develop its impulses without contact with Paris, is evidence of his unique creative intuition and constructive talent, which ingeniously reflected knowledge of 17th century Flemish painting, new contacts with the Dutch avant-garde and his own lyrical-romantic imagination. The confident, sophisticated composition, based on the dynamic relationship of curved and rounded lines, intrigues the viewer with its artistic execution, which gives the impression of a collage. The richness of the painting approach is accentuated by the adding of sand particles to the still wet colour, using writing or applying wood imitation to the flute. His way of rendering the objects allowed Filla to develop the entire space, which is splintered into multi-layered facetes. The flute placed diagonally across the entire picture is painted from above, the pitcher from the side and the score from the front. This is especially important from an iconographic point of view, as Filla inscribed in the score a page from the Psalms of David set to music, as evidenced by the inscription "PSAUMES DE DAVID", most likely by Benedetto Marcello. This 18th century Venetian composer became famous for his contrapuntal setting of the first 50 psalms for voice and accompanying instruments. The genre of wistful songs must have suited Filla's mood in Holland. Likewise, the concept of counterpoint, in which two or more voices with a separate melodic line intersect, is not randomly chosen, the painter must have been very well aware of this fact. He undoubtedly appreciated the intertwining of unrelated melodies, just as different layers of reality intertwine in cubist pictures. Prof. Vojtěch Lahoda mentions this painting in his monograph, in which he claims that the still life was painted in Rotterdam and exhibited at the Moderne Kunst Kring exhibition in Amsterdam (1915–1916, cat. no. 12), in the catalogue of which it was also reproduced (V. Lahoda, Emil Filla, Academia 2007, p. 185). On the back of the painting the number 1 is also inscribed, which signals that it was the first exhibit included in the exhibition Emil Filla, Regional Gallery in Litoměřice, 1967, cat. no. 1, in the catalogue of which there is a note mentioning that there was a label on the original stretcher bar with the inscription "Emil Filla, La cruchon et la flute (l'huile), Amsterdam, Egelantiersgracht 7". PhDr. Karel Srp also mentions in his authorized report that Vlastimil Jiřík's diploma thesis concerning Filla's Dutch period included a list of the author's paintings, where this work was again given the number 1 and was already then in a private collection. Also worth noting is the number 507 in a circle, which is written by Filla's hand on the stretcher bar and which clearly refers to the Dutch – now non-existent - address where Filla most likely exhibited the work. He moved to the address given on the label at the end of the summer of 1915. The value of the work is further enhanced by its reproduction in the journal Umění (1968, year 16b, p. 402) and also in the author's most comprehensive monograph (V. Lahoda, Emil Filla, Academia 2007, p. 185, fig. 167). The authenticity of the work was verified by the Filla Foundation and the painting will be listed in the list of works prepared by prof. V. Lahoda, CSc. Assesed during consultations by prof. J. Zemina and PhDr. R. Michalová, Ph.D. From the attached expertise by PhDr. K. Srp: "[...] This is a great example of Filla's Dutch period, which is waiting for its comprehensive exhibition evaluation. [...]". 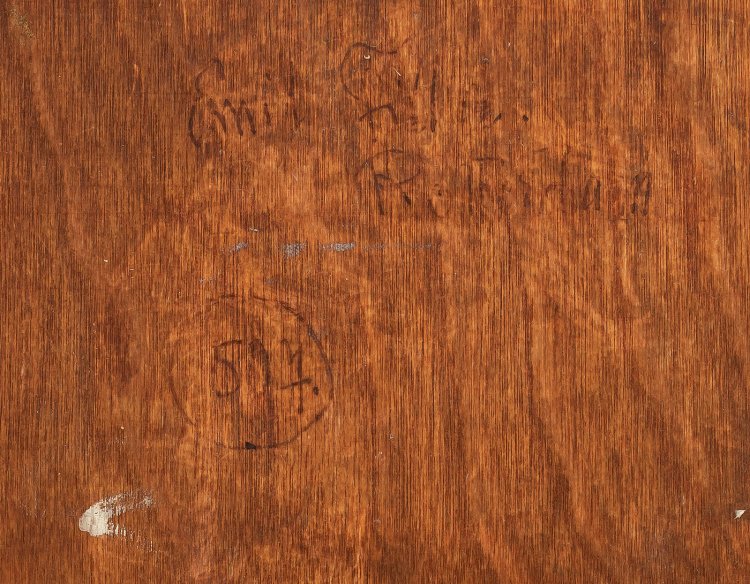