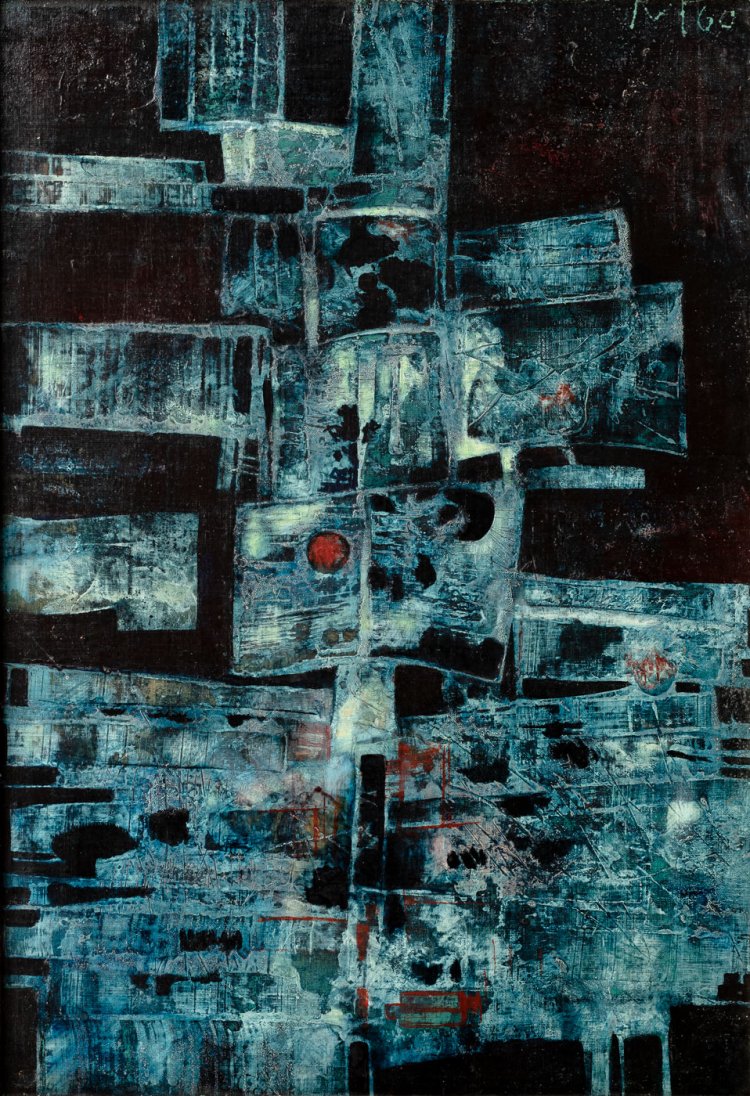 The Small Hat on Big Head

This exellent, highly imaginative work is a masterful representative of the author's significant creative period. At the end of the 1950's Medek gradually began to turn away from the subject of ruthlessly deformed, mostly female figures set in empty spaces and full of brutal absurdity. His artistic expression began to gain in more pronounced stylization, while figures and spaces started loosing their descriptive details. Gradually he came to a completely abstract approach. However, before establishing a range of cycles and themes which he then devoted himself to more intensively, in 1960 Medek was still looking both for a new artistic language as well as new topics. In this period we therefore find paintings with a wide range of names, completely different colours, format and overall effect. The Small hat on a big head is unique and one of the best paintings created in 1960. The figure in the image so far remains decipherable, but only in the form of a sign. The central triple rectangle with a red eye probably symbolizes the head. The exceptional internal fullness of the work is based on the relationship between the horizontal and vertical axes, which diverge to the sides. The painting was a gift by Medek to a prominent Czech photographer, in whose collection it has remained so far. Assesed during consultations by prof. J. Zemina and PhDr. R. Michalová, Ph.D. From the attached expertise by PhDr. K. Srp, author of the forthcoming monograph in which the canvas will be included: “[...] The painting comes from the peak period of dissected paintings, which belong to Medek's most important artistic achievements during his prematurely concluded artistic development. It was created in 1960, when Medek worked with unprecedented commitment, because he was within reach of his greatest discovery, consisting in multiple layering and overlapping of paint, which brought him to the threshold of non-figurative painting. Though in his case this did not mean that he entered the field of abstract expression. […] “.