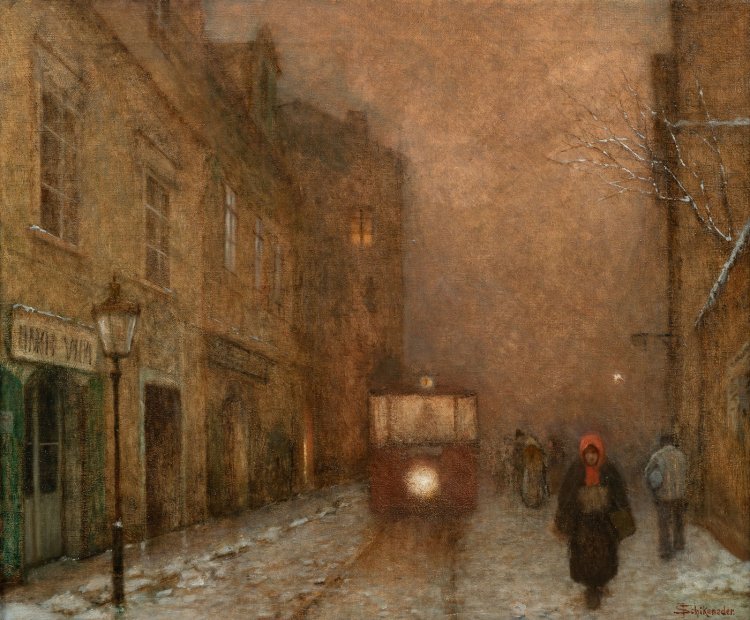 Tram in a Prague Street

Since searching for a distinct artistic form at the beginning of his career, Jakub Schikaneder gradually settled into his artistic convictions, which eventually led him to finding key themes after 1900. Among them are pictures of interiors, nostalgic dawns or twilights and the nocturnes of Prague's streets and hidden corners. The presented oil Tram in a Prague Street belongs to this last category. This is a theme from Schikaneder's mature period, when the streets of Prague, filled with melancholic figures, were relentlessly penetrated by a dynamic element of modern civilization, which led to the characteristic impression of the intertwining of different times and categories.

The contrast between these two basic elements seems to be the core of the message that the author is trying to convey to us; Schikaneder's social and emotional commitment is combined here with the lyricism of pictorial dreaming shrouded in the inimitable foggy veil of the evening metropolis. The canvas captures not only the projection of a romantically viewed reality, but rather the contemplative and chilling mood of pedestrians full of their own emotions, memories, dreams, feelings of alienation and anxiety, crouching in coats, tightly tied scarves and fur muffs warming their frozen fingers. The painting radiates anxiety, so typical for the author, visible in the frontally captured woman in the foreground, which contrasts with the boarding passengers, for whom the tram may symbolize the hope for a better and more comfortable life. We can clearly see here a wide range of the ideas of Karel Hlaváček, Jiří Karásek of Lvovice or Rainer Maria Rilke, who were shaping the literary and artistic scene in Prague at the turn of the century, presented in an art form.In terms of painting style, Schikaneder again presents himself here as a distinctive follower of Leonardo da Vinci's sfumato, where the outlines of the individual shapes merge to create a uniform, almost tangible atmosphere. It is penetrated by a few mutually independent and softly obscured sources of artificial light and the use of the popular deep red colour, which contrasts with the whole composition of the painting and attracts a large part of the viewer's attention. Together with other works from this period, the Tram in a Prague Street is the culmination of the artist's efforts, ranging from realism to romanticism to pictorial lyricism. This is supported by the fact that Schikaneder painted a number of Prague scenes from memory, moving from documentary to vision, because the redevelopment of Prague erased a number of picturesque locations from the face of the city. Presented in a tasteful period frame. The canvas is published and reproduced in the author's last monograph, published on the occasion of a comprehensive exhibition in the National Gallery in Prague (V. Hulíková, ed.: Jakub Schikaneder, 1855–1924, National Gallery, Prague 2012, reproduced on p. 180, cat. no. 113). Assessed during consultations by prof. R. Prahl, CSc., and PhDr. Š. Leubnerová. Expertise by prof. T. Vlček, Csc. attached.