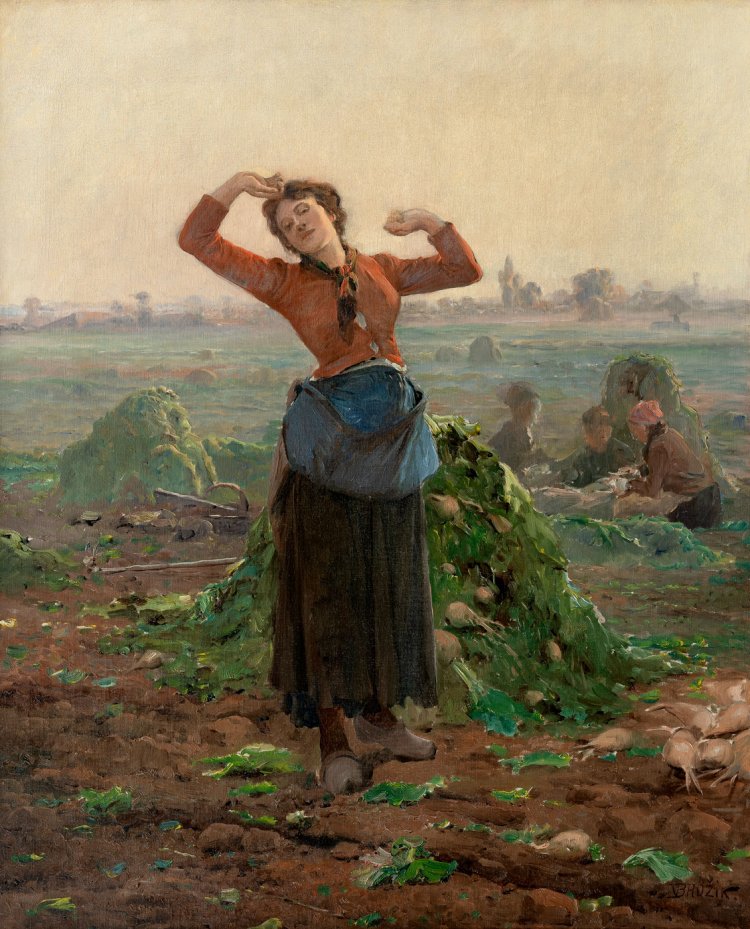 Girl in a Beet Field / Motif from Roztoky

The presented canvas illustratively represents the mature style of Václav Brožík who belonged amongs the most prominent artists of his time.  This distinguished member of the National Theatre generation established himself both at home and abroad as a portrait master, painter of monumental, narrative historical compositions and an excellent genre painter presenting to the art loving public simple scenes from the life of villagers. From the 1880s onwards, Brožík drew inspiration both from the Dutch artists of the 17th century and his contemporaries J.-F. Millet or J. Breton, and he did not give up village genre scenes, based mainly on the environment of Brittany and Normandy, until the end of his days. Throughout the final decade of his life he tirelessly sketched not only in the aforementioned French locations, but also during his wanderings through the Vltava region from Prague to Roztoky, where – to escape from his social duties - he rented rooms during his Prague tenure. He painted the local flowering alleys in the spring and the autumn fields during the beet harvest countless times, capturing them with a strong sense of modern realism.

Brožík's Girl in a Beet Field, which combines most of the above-mentioned sources of inspiration, also belongs to this circle of works and in terms of brushstroke and the choice of subject it unmistakably points to the author's characteristic style. It is recognizable by a carefully elaborated plan and the perfectly moduled shapes of the stretching girl, who is set in a relaxed landscape composition using the horizontal lines of the river lowland. The shift from the aesthetics of smooth academic painting to a certain kind of naturalism aptly points to a fundamental modernization in Brožík's late work.