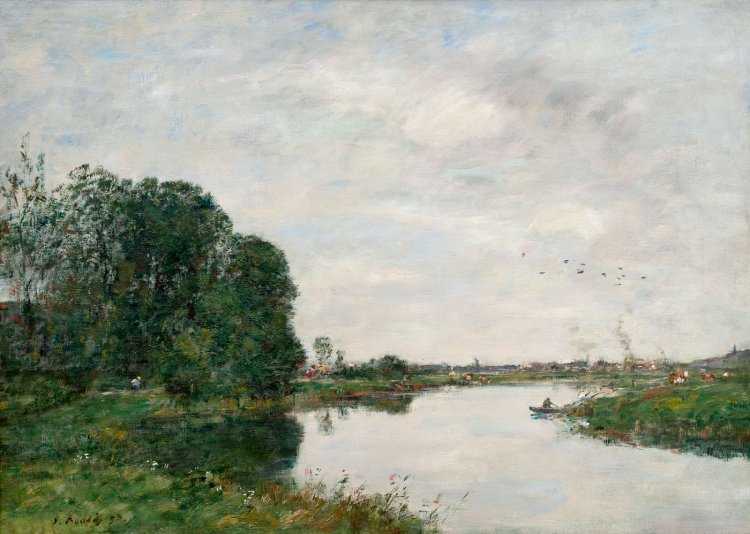 The appearance on the Czech art market of a painting by French realist Eugéne Boudin,

whose work stemmed from the principles of the Barbizon School, offers a unique opportunity to follow the bridge created between the older generation of French plein air painters and the progressive young generation of Impressionists, whose predecessor Boudin is considered to be. Proof of this is the fact that Boudin was actively involved with them at their first exhibition and was a lifelong friend of C. Monet. Dutch painters of the 17th century, or his peer J. Jongkind, also had a major influence on his work. Inspirational sources can be also found in his numerous travels to foreign countries such as Italy and Belgium. Boudin, a trained printer, originally found his way to painting thanks to his stationery and framing shop, which he ran in Le Havre, and which was widely visited by artists. Due to these circumstances he took up painting himself, and in 1851 even earned a scholarship to study in Paris. Happy encounters with the leading artistic personalities of his time played a key role in his life. At the turn of 1857 and 1858 he made friends with the above mentioned C. Monet and a year later he met G. Courbet, thanks to whom he made the aquaintence of Ch. Baudelaire, who became his first critic and introduced him to the Parisian audience. Boudin was a genuine marine painter, and the central theme of his work was everything connected with the sea, the seashore, and water surfaces in general. His numerous trips to the Normandy coast and to Brittany were of great importance in shaping his style, especially in the beginning. Thanks to his vividly painted clouds and the diligence with which he devoted himself to faithfully capturing the celestial moods, he was given the epithet "King of the Heavens" by C. Corot himself. This canvas shows exactly that. It captures a tranquil river bay with a boat by the shore, showing the artist's exceptional sense of light diffusion, color effect and the overall atmosphere experienced directly in the open air. We see a section of the river La Toques near Saint-Arnoult, which is characterized by the author's immediacy, typical dark clouds under a translucent sky and unmelodramatic sincerity. The detail of several sources of smoke in the background is an unobtrusive reference to the contemporary penetration of civilization into the up till then relatively peaceful course of nature, which, from a history of art perspective, anticipates future civilist aesthetics - here we can find a common denominator with, for instance, the legacy of Antonín Chittussi. The value of the work is confirmed by its exhibition history (Eugène Boudin, Schmit Gallery, Paris, 1965, cat. no. 93; Eugène Boudin, Kunsthalle, Bremen, 1979, cat. no. 67; Christie's, New York, 2001) and its mention in literature (Schmit, R .: Eugène Boudin 1824–1898, Catalog raisonné de l'oeuvre peint, volume III., Paris 1973, inventory no. 3196, p. 229, under the title La Toques a Saint-Arnault). Assesed during consultations by prof. R. Prahl, CSc., and Mgr. M. Dospěl, Ph.D. Expertise by prof. R. Prahl, Csc. attached.