Bazille's canvas called Valley in Fontainebleau forest is a unique opportunity on the Czech art market - and a very rare one in the world as well - to meet the work of a French portraitist and landscape painter who was originally supposed to become a doctor to please his family. Luckily he failed his final medical exams and could then definitely devote himself to art. This rare collector's piece is the work of an artist who is today of world renown. He was a member of the original Impressionist group, and despite a very short professional career as a painter (it lasted only seven years and was forcibly ended on the battlefields of the Prussian-French War, which he joined as a volunteer) he played a vital role in the shaping of this truly revolutionary art movement, which marked the beginning of the upcoming dynamic era of the so-called "isms". In addition to his own original work, Bazille often provided financial support to the other less wealthy members of the group and often gave them access to the most basic artistic needs: paint, canvas and the warmth of a studio. It was the 1860's, in which the presented picture was created, that became the shaping period when the great artists such as E. Manet, C. Monet, A. Sisley, A. Renoir, E. Degas, along with F. Bazille, moved from studio painting and strict academism to what we now call modern art. In depicting people, cities and nature, the most important thing for them was the immediate impression and its ephemeral nature created by plein air painting, which they indulged in, following the recent tradition, during trips to the surroundings of Fontainebleau. Bazille's Valley in Fontainebleau forest was painted on the basis of his stay in Chailly and Barbizon in 1865. The picture he created is at first glance a novel art synthesis, which is on the one hand influenced by G. Courbet or T. Rousseau and their realist approach, on the other hand it emphasizes in a purely impressionist way the role of light, spontaneity and brushstroke dynamics creating the impression of a vivid photographic snapshot. Here the author created a distinctive micro-world, with only a modest colour palette from which he managed to conjure up innumerable shades of green, contrasting harmoniously with the brilliant white of the clouds and the azure colour of the sky. The value and undeniable authenticity of the work is confirmed by its publication in the inventory of the painter's work (Schulman, M.: Frédéric Bazille, 1841–1870, Catalogue raisonné, Peintures - Dessins, pastels, aquarelles, Sa vie, son œuvre, sa correspondance, Paris 1995, no. 15, reproduced page 124.).  Assessed during consultations by prof. J. Zemina and prof. R. Prahl, CSc. Expertise by PhDr. R. Michalová, Ph.D. attached. 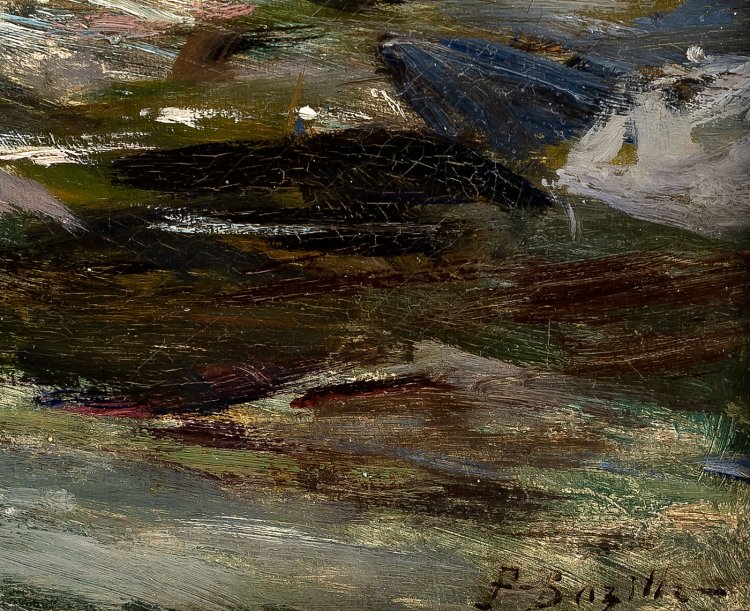 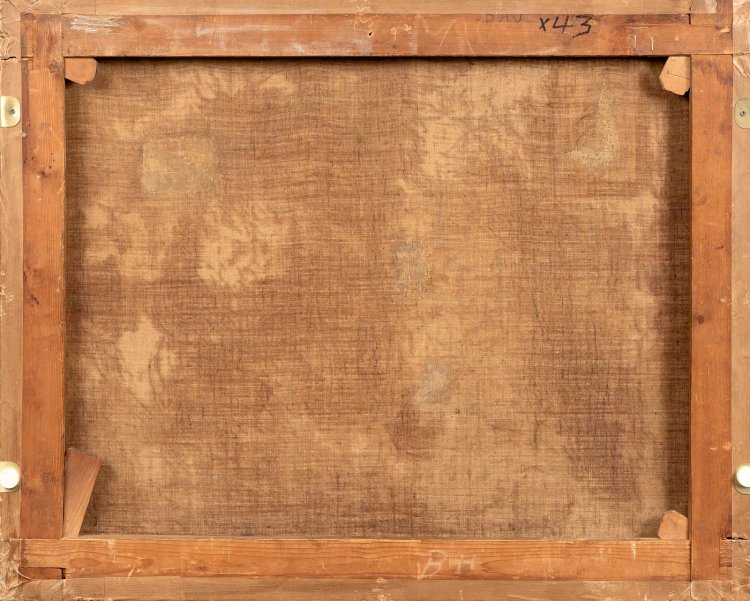