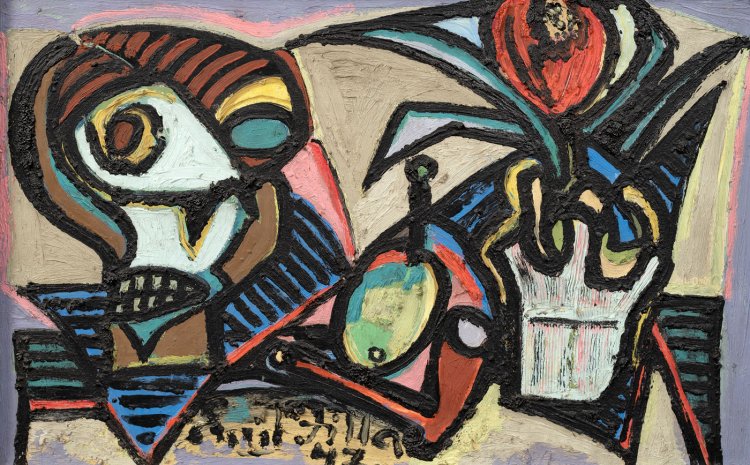 Still Life with a Skull and a Tulip

The compact Still Life with a Skull and Tulip is a strong representative of Emil Filla's post-war period and shows him as a daring colourist. Filla's modern conception of expressive realism, never completely free from cubist experience, is all the more appealing because it presents intentionally an unexpected combination of motifs - in this case a skull and a flower, which appear alongside neutral compositions with fruit or other foods. The individual elements are placed against a background of light brown areas, which also extend into the foreground, into which a line of pink penetrates on the side, accentuated at the edges by purple. However, the extraordinary colour scheme is only an accompanying feature of the individual objects, which are highlighted by black lines. These lines are something between an outline and a shadow and increase the plasticity of the displayed objects. Filla likewise uses colours that are close to each other, but are not usually used together. Nevertheless, they are extremely harmonious to look at and draw the viewer's eyes into the interior of the canvas. The dense colour mass created by brush and spatula adds spaciousness to a strongly stylized skull with the expression of African masks, which Filla had been collecting, together with other things, for a long time. The formal and iconographic role of the skull lies in its symbolic meaning containing mournfully bitter memories of war and shadows of the past, which the painter was unable to easily forget. The painting was exhibited at a solo exhibition of Emil Filla's work in the Vincenc Kramář Gallery (January 7 - February 18, 1968, cat. no. 33), prepared by Čestmír Berka, and is also reproduced in the author's most comprehensive monograph (V. Lahoda: Emil Filla, Prague 2007, p. 577, fig. 632). The value of the canvas is increased by the author's adjustment, as well as the fact that it comes directly from the artist's estate, as evidenced by the list of works prepared by prof. PhDr. V. Lahoda, CSc. The authenticity of the work was verified by the Filla Foundation. Assesed during consultations by prof. J. Zemina and PhDr. R. Michalová Ph.D. From the attached expertise by PhDr. K. Srp: "[…] The painting is a unique example of the upsurge in Filla's work, which after his return from the concentration camp set out in a new, very original direction, and is still waiting for its full evaluation. […]". 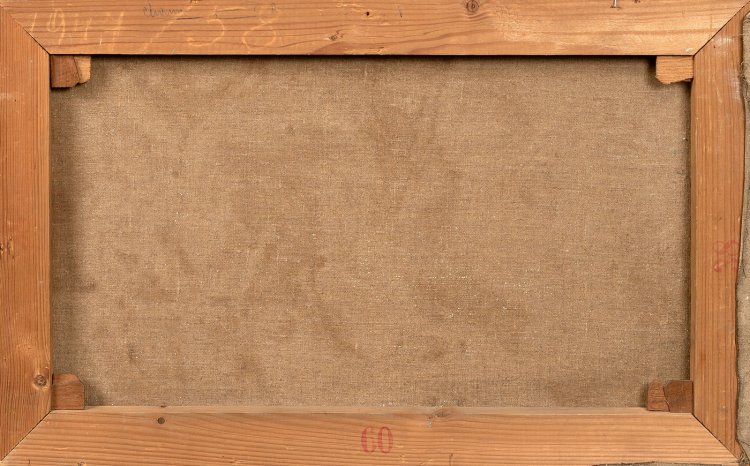