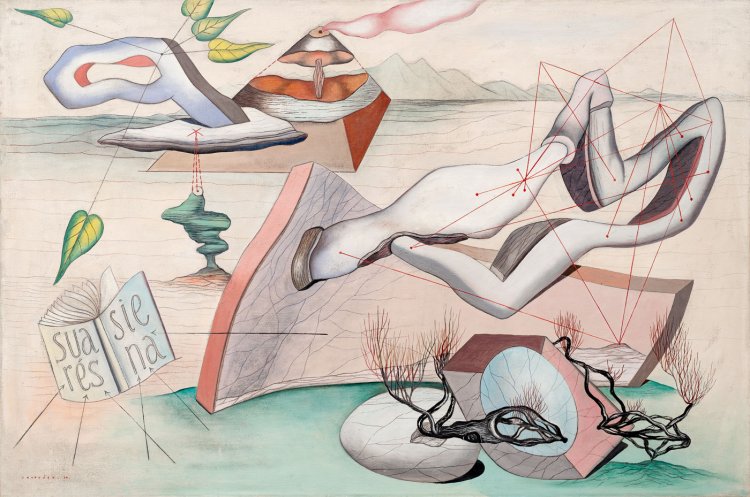 Landscape with a Book

This excellent large-format work by František Janoušek is the culmination of his dynamic surrealist period, which he began in the mid-1930's. While most Czech artists were influenced by the style drawing artistic impulses from the human subconscious after seeing the exhibition Poetry 32, Janoušek had been following this path in his works since the turn of the 1920's and 1930's. For him surrealism became the most natural expression of himself, his knowledge and experiences. The captivating canvas Landscape with a Book is a memento of his journey through Italy in 1929. Venice, the Roman Forum and Siena became his source of inspiration for several more years. In this magnificent painting Janoušek's experiences of the country that laid the foundations for European culture are reflected. The bright white light that permeates the entire canvas embraces the individual pieces of Italy that Janoušek summed up in the painting. The torsal shapes of humanity, distantly reminiscent of deformed fragments of ancient sculptures, and the germs of nature growing from ovoid shapes, indicate a clearly specified space for the artwork. The painter connects the mainland with a water surface, which somewhere near the horizon turns into a smoking volcano, through the cross-section of which we can see all the way to the mountains in the background. What may seem to be the last memory of sunny Italy, is, however, also the beginning of a new stage of Janoušek's work, in which peace and rational discipline materialize on his canvases. The atmosphere of the Apennine Peninsula gave him a dynamic that, over the course of a few years, was fundamentally incorporated into his work. Distinctive geometric lines highlight the internal relationships and connections in the painting, as well as following the cognitive disciplines of knowledge of ancient cultures. The inscription "Suarés" on the covers of the book may refer to André Suarés's book The Condottiere’s Trip to Italy. The reference to this turn-of-the-century guide book to northern Italy is a symbolic summary of everything this country meant and gave to Janoušek. This excellent painting can be described without hesitation as one of the most important works of František Janoušek to appear on the Czech auction market so far. It comes from the collection of the Italian art historian and collector Artur Schwarz. It was exhibited at the Schwarz Gallery in Milan in 1969 (cat. no. 6). The painting will be published and included in the list of works in the upcoming monograph by PhDr. J. Vykoukal. Assesed during consultations by prof. J. Zemina and PhDr. J. Machalický. From the attached expertise by PhDr. K. Srp: "[...] At first glance the painting attracts our attention with its clear lightness, with which the author worked for a short time, and which still ruled out the use of strong, expressive colour. The painting summarizes many motifs, including hills and the sea in the background, as well as making an allusion to Mount Vesuvius. His drawing base, which enabled the author to work with intertwining clusters of meanings, based on the opposing tension of organic and geometric, is also important. [...] “.