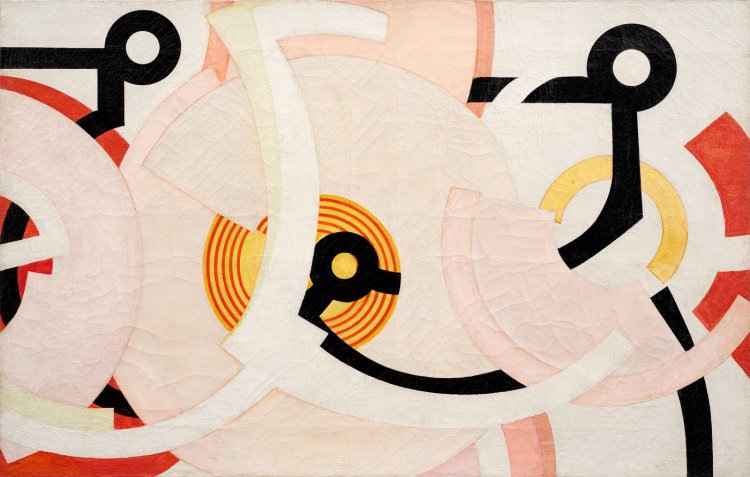 This absolutely unique painting by František Kupka is one of the most important works of his abstract period of the 1930's. It is such an artistically strong tribute to shape, colour and their mutual relations and tension that it will undoubtedly be an ornament of any international art collection. From his native Opočno and saddlery workshop, Kupka very quickly worked his way up to the Academy in Prague and later in Vienna. He became close to occultism and mysticism, creating paintings with a symbolist theme, canvases full of the magical power of allegorical themes. In 1895 his artistic talent won him a scholarship to Paris, where he continued to study and make a living creating posters and illustrations. Gradually, his interest in modern art, especially futurism, increased. But it was orphism, through which he tried to capture not only shape, but also sound, light and impression, that became essential for him. An experiment with colour spectrums led him to completely abstract shapes. His Amorphous. The two-color fugue, which he exhibited among the Cubists at the Autumn Salon in 1912, was the result of a long-term shift from concrete to non-objective painting and far outstripped the later development of abstraction. Kupka's constant work on the possibilities of abstract expression, from which, however, the depth never disappeared and the internal issues were constantly examined with great attention, went through several different stages of development. In the mid-1930's, the best of Kupka's Vertical plans and the Mechanical series came to fruition in the Divertimento II painting. We have before us a composition that is pure from a geometrical point of view as well as colour-wise, its focus is a disc-like shape. The name Divertimento is associated with Italian musical terminology and refers to a light-hearted or entertaining instrumental composition. Music, of which Kupka was a great admirer, was incorporated into the painter's early works and was later repeatedly transformed by him into a play of lines and shapes, into mechanisms whose emotional effects create a deep sensory experience, reflected in the very name of the works. PhDr. K. Srp writes in his expertise: “The painting brings ingenious intersections of circular surfaces and their various overlapping sections, through which especially a distinctive black curve penetrates, which acquires circular shapes in its bends. Kupka thus excluded any orthogonal relationships from the painting, settling for rounded sections, each of which he gave one angled, monochrome colour. The author expressively imbued the painting with clear movement, forcing the viewer to explicitly follow the inner movement of individual, precisely defined geometric plans, which sometimes differ only slightly and imperceptibly in colour. " The painting is firmly connected with Divertimento I, which is now in the collections of the Guggenheim Museum in New York, and with a pair of Hot Jazz paintings (I and II, 1935), to which both Divertiments are linked. It is not clear whether the work was created in 1935, which some contemporary art historians tend to believe, or in 1938, as dated by Kupka himself. Divertimento II comes from the collection of the Seligmanns, who bought it in 1955 at the Rose Fried Gallery. Subsequently the work became part of the modern art collection of the Hascoe family. Now it comes from a respected foreign collection. It was exhibited at a solo exhibition of František Kupka in S.V.U. Mánes in 1946 (no. 149), then in New York at the Rose Fried Gallery (Kupka, 1953, cat. no. 4) or for example at the artist's retrospective at The Solomon R. Guggenheim Museum (New York, František Kupka 1851–1957, A Retrospective, cat. no. 181). It is reproduced, for example, in the author's monograph entitled Entertainment II, here dated 1938 (L. Vachtová, Prague 1968, cat. no. 317), or in K. Srp's publication Geometry of Thoughts (Řevnice 2012, fig. 78). Restored by restorer ak. mal. rest. Zora Gromannová, the craquelure deliberately preserved in its original form. The work will be included in the forthcoming monograph by doc. PhDr. M. Theinhardt, CSc. and P. Brullé. Assesed during consultations by prof. J. Zemina and PhDr. K. Srp, whose expertise is attached. 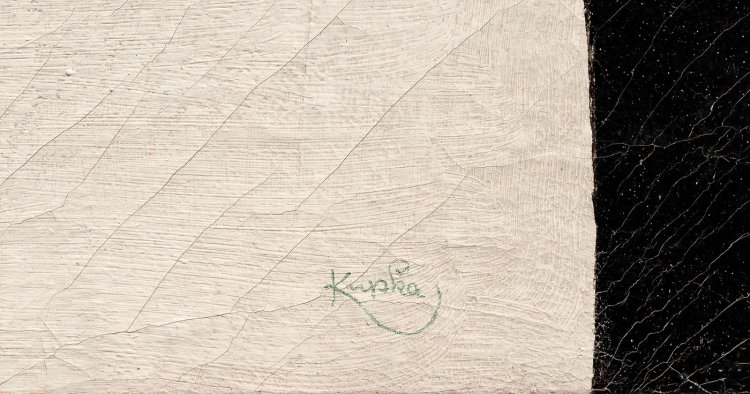 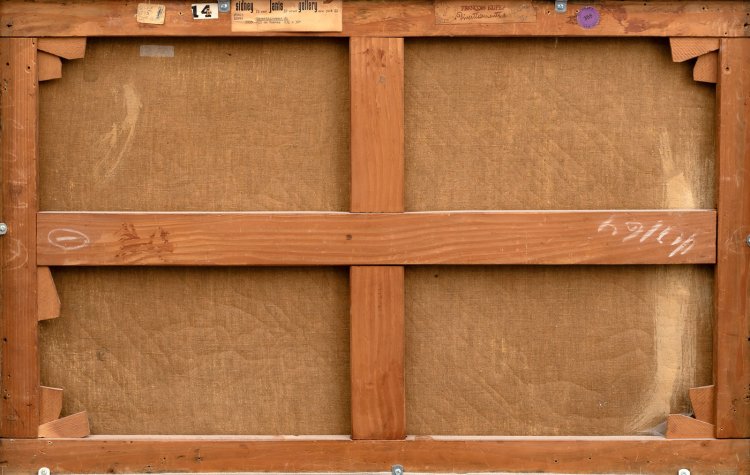