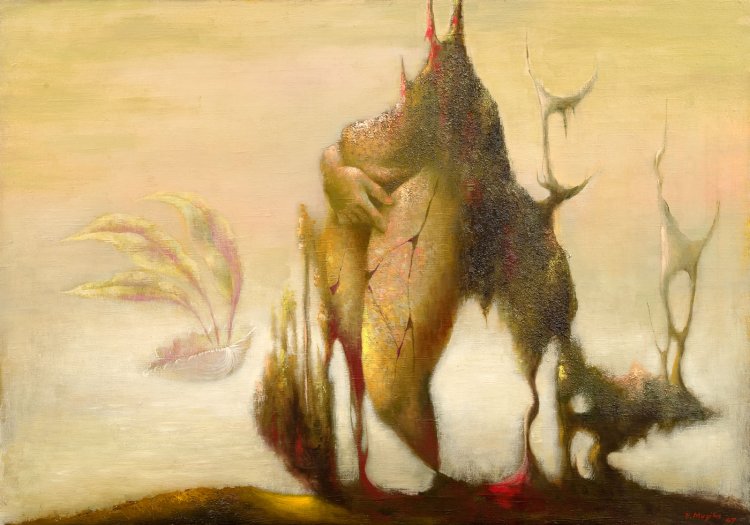 This captivating and very rare canvas by František Muzika shows us, in a unique way, the fragility of his artistic expression, as well as his sensitive perception of the world and his reaction to fundamental historical moments. After graduating from the Academy of Fine Arts in Prague Muzika continued his studies in Paris, which influenced him in a major way and led him to lyrical cubism. The author began to apply imaginative tendencies first in his cubist works, but during the war they quickly turned into dreamlike images, gradually inspired by elementary forms of the organic microcosm. The war meant a difficult test for surrealism and relegated it to the sphere of unofficial, forbidden art. The work of many artists became a profound mirror of war, a shocking testimony of horror, anxiety and grief that have been embodied in eloquent symbols and parables that remain effective to this day. Through his imaginative painting Muzika found a way to react to the experience with extraordinary sensitivity. Even right after the war mythological themes still appeared in his work, such as allegories of reality or the desire to return to the values and stories from ancient history, enduring and fixed by time. For him, the archetypal theme was a way to bridge the miseries experienced and regain confidence in the newly acquired humanity. The theme of the birth of Venus, a symbol of beauty and purity, is transformed in his hands into subtle fragments of organic matter, which in an indefinite space and time frame change and form into a female torso. This excellent, and within Muzika's work very rare painting was created in the turbulent post-war period full of the awareness of the experienced horrors and at the same time the power of the newly awakening and emerging world. In this painting life is born from an abandoned shell floating like a sailboat through the mist of a troubled timelessness. The torn membranes of the tangled plants and the ragged rocks transform into matter and change into recognizable shapes of female thighs, indicating a contrapposto, and thus also Muzika's inspiration by a traditional myth. Venus appears to bring new light. As yet she does not blaze with colour, as in Botticelli's version, but in an unobtrusive and finely balanced muted colour scheme she becomes a modern update, and thus a confirmation of the immortality of the myth. The painting was exhibited in Hluboká nad Vltavou at the exhibition Imaginative Painting 1930–1950 (1964, cat. no. 56) or at the solo exhibition of the painter in the Wallenstein Riding School of Prague Castle (Prague 1981, cat. no. 92). It was published in the author's monograph (F. Šmejkal, František Muzika, Prague 1966, cat. no. 112, p. 149) or in the catalogue of the exhibition Czech Imaginative Painting (F. Šmejkal, Rudolfinum Gallery, Prague, p. 355). Assesed during consultations by prof. J. Zemina and PhDr. A. Šmejkalová, Ph.D., art historian and daughter of the author. From the attached expertise by PhDr. K. Srp: "[...] Muzika shifted the whole scene into a misty dawn or dusk. It takes place on the coast, whose front plan is represented by a kind of organic growth, while from the back you can see an incoming ship in the shape of a shell [a direct link to Botticelli's painting] with leaves instead of a sail. The sophistication of the dim scene was emphasized by Muzika with two insignificant, yet compelling coloured chords, in yellow and red, which illuminate the edge of the front plan. The painting is groundbreaking. [...] “. 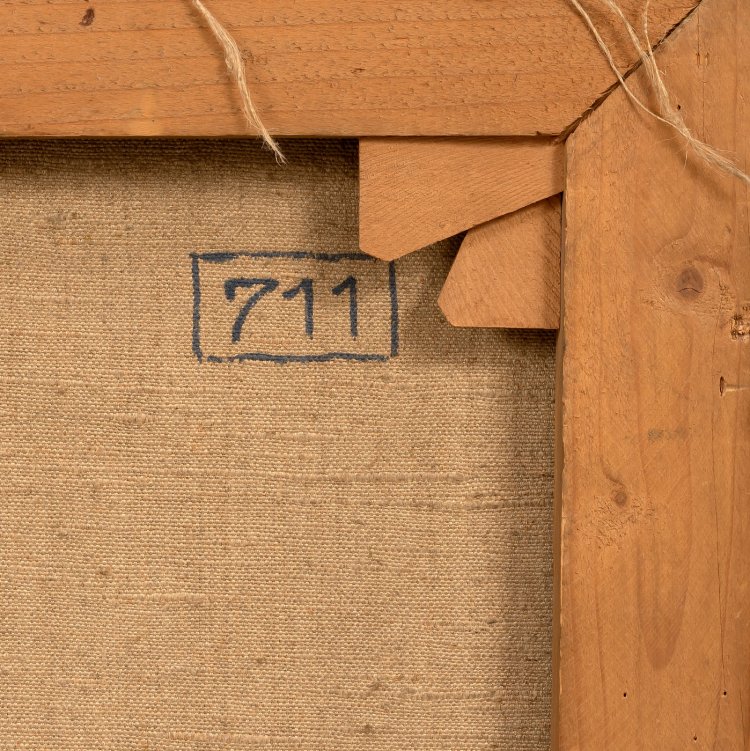