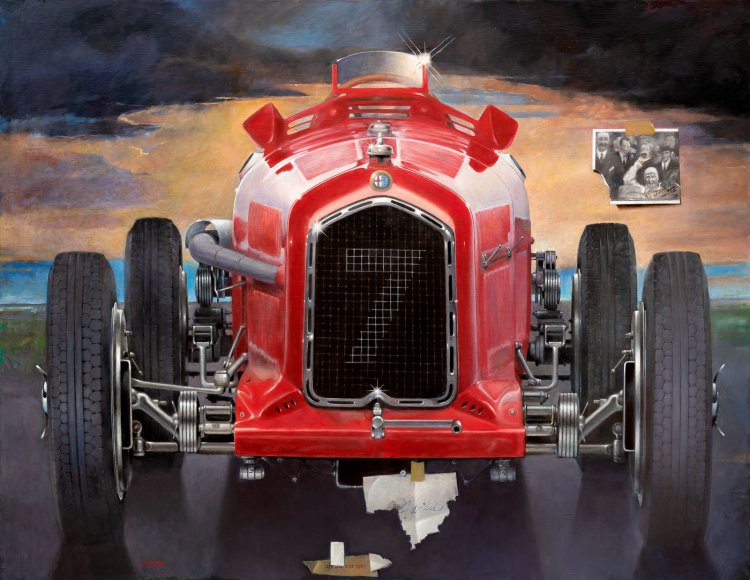 This absolute masterpiece from the studio of the now legendary Theodor Pištěk can be considered one of his most important works to appear on the market. The author himself values this painting as it has an exceptional, very personal position among his works. The origin of this excellent canvas can be dated back to the 1980's, when Pištěk was inspired by the very strong story of the French car racer Guy Moll. Despite the fact that Moll died at just 24 years of age and his professional racing career lasted only two years, he managed to make a name for himself in the history of the sport so much so that he is still considered to be the greatest motoring talent in history. The young man also impressed Enzo Ferrari, with whom he signed a contract in the fateful year and became part of his racing team. In April 1934, Guy Moll started in his first race with the Alfa Tipo B P3 in Monaco. After this race no one doubted that the young Algerian was heading for the stars when he defeated all his opponents, including names such as Tazia Nuvolari, Achille Varzi, Louis Chiron and Marce Lehoux. However, Moll's star went out prematurely a few months later during a tragic accident at the Coppa Acerbo race in Pescara, where his Alfa skidded and flew off the track. Through this stunning painting Pištěk decided to pay tribute to this legend, but also in a way to project this story into his own life. However, he did not actually start painting until a few years later, and as a fragment on the lower edge of the painting shows, he devoted himself to it - with breaks - over an incredible period of 25 years. Its completion was not a matter of course, as the painter also imprinted strong personal experiences from his private life into the painting. He returned to it many times so that he could leave it again for a while. He thought about every brush stroke, every detail of the painting, until in 2017 he was finally able to finish it with full concentration. Looking at the painting we see and inherently feel the concentrated sum of the life and painting experiences of the artist, who must always have intrinsically strong reasons for artistic creation. The canvas, which perfectly synthesizes all the painter's artistic abilities gained over the years, is an absolutely masterful representative of a specific artistic expression, which can withstand comparisons perhaps only with the famous Gerhard Richter. The dominant motif of this extremely captivating composition is the beautifully gleaming red racing car Alfa Romeo, the predecessor of the monoposto Ferrari cars, with the number seven on the radiator. This is executed in such a brilliant painting technique that in the quality of details it is comparable to a photograph. Typical Pištěk motifs are elements evoking the baroque illusiveness of trompe l 'oeil. Meaningful messages are thus seemingly "glued" to the painting: a black-and-white photograph with a torn corner and the racing driver's autograph, in which a waving Guy Moll is depicted in front of venerable men in suits. A piece of paper with the inscription "Adieu" is attached to the underside of the car with tape and a pin, as well as a piece of cardboard with dates referring to the origin of the painting - 1992, 2003, 2008 and in red 2017 - as if it were a real piece of adhesive tape, which the author casually glued to his work. The power of the painting, in which Pištěk's personal racing experience is directly reflected in, is perhaps best expressed in his own words: “The feelings one has when racing are absolutely incredible. They must be akin to the feelings Hillary must have had when he conquered Mt. Everest. When racing, a person is completely alone, completely separated from the world. How he solves everything depends solely on him. The atmosphere and feelings I experienced during a race have never been replaced by anything.” The author found it very difficult to say goodbye to this painting, as he realizes that a work of such personal and artistic significance will not appear again. 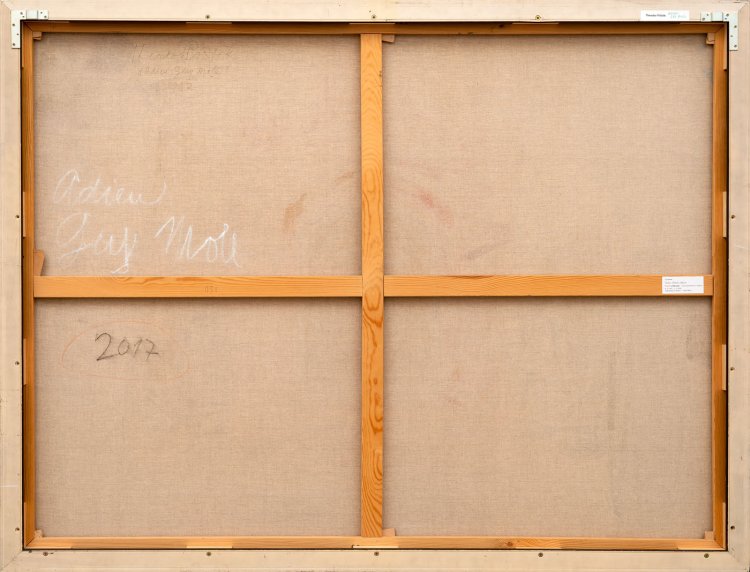