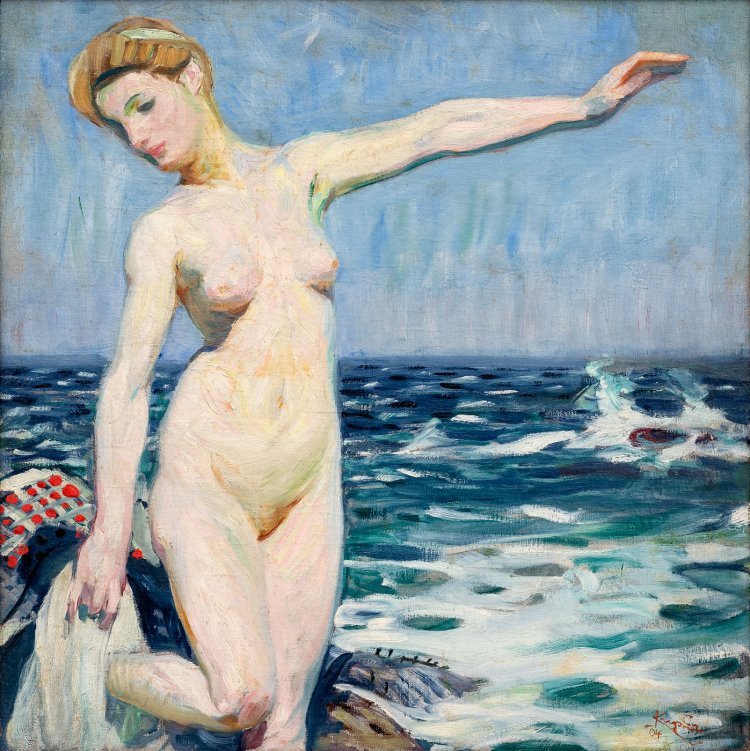 This exceptional painting is an excellent example of the author’s early work, with outstanding artistic and painting qualities and of global significance. The work belongs to the artist’s important Parisian period of 1904, when, after winning a gold medal at the 1904 World Fair in Saint Louis for his painting Épona-Ballade. Les Joies, his fame reached beyond the ocean. This painting, along with several others, was painted in the picturesque French town of Trégastel, where Kupka had been travelling since 1902.

Enchanted by Greek mythology, Kupka presents to us a Greek ideal of beauty, (understood and approached in a modern way, yet still valid), in the form of a beautiful naked woman emerging from a stormy sea, which undoubtedly refers to the ancient goddess of love, sexuality, fertility, and beauty – Aphrodite. This “foam-born” goddess is depicted in her perfect purity and charm as she was created by nature, unaffected by the cruelty and corruption of the human world; completely innocent, unaware of her immense sensuality and sexual attraction. The body, showered with sunlight so much that it subtly covers anatomical details, is shaped using coloured surfaces with pervading green and blue shades. This method reflects Kupka’s deep interest in physical and biological processes, as well as his interest in Spiritism and the related belief in the existence of the aura as an image of pure life energy and vitality. In a naked female body set in the landscape, the artist seeks for the harmony of man and nature as a kind of universal unity corresponding to his holistic approach to the world and the role of artist, which he expresses himself: “We create art only because of our need to express ourselves on the outside. I myself experienced wonderful feelings, aroused only by the care of hygiene. After the morning shower, I exercise all year long – completely naked in the garden. It’s also hardening. I perform it as a prayer as I turn to the rising sun, (the great creator of fire), in the beautiful season, surrounded with the birdsong, having my body permeated throughout by scents and rays of light, I live so very wonderful moments…” The artist emphasised the almost classically represented act with the rippling lively sea in the background, in which we can see an indication of his future fascination with rhythmic effects and various regularly repeating movements or sounds, escalating into Orphism and abstraction. It is also worth mentioning the importance of placing the figure in the composition according to the Golden Ratio, with a distinctive hand gesture which Kupka had used and elaborated in previous years. A noticeable similarity in the composition of the female body can thus be found in his famous illustrations of Solomon’s Song of Songs (Jean de Bonnefon: Le Cantique des Cantiques qui est sur Salomon, 1905), but also in subsequent years for example on the study André (1908), and one of his works on Prometheus (1907). An obvious previous stage to this painting was Act on a Sea Coast I, which has a similar layout but is of a smaller format.

The fact that the painting is of high value for collectors and galleries is enhanced by the label on the reverse confirming the authenticity of the work by one of the greatest experts on Kupka’s work, Karel Flinker (the letter of October 13, 1983), and later also by his heir Pierre Brullé. The painting has long been in private collections and was then purchased in 2000 in Lerici at the Galleria del Levante, directly from the exhibition La nuova oggettivitá e altre cose, dedicated to the personality of Emilio Bertonati (1934–1981), who raised public awareness of many disregarded figures and associations of European modern art. Galleria del Levante, with an international scope of activity, organised Kupka’s solo exhibition as early as April 1965, and a month later it was reprised in its Roman branch. The artwork was exhibited in 2015 at the Dorotheum in Vienna, and also in Helsinki as part of a travelling exhibition in 2019, in the catalogue of which it is also published. In the years 2019–2020, the painting was lent to the permanent exhibition of the Museum Kampa. It will be included in the forthcoming author’s monograph and list of works by doc. PhDr. M. Theinhardt, CSc., and P. Brullé. Assessed during consultations by prof. J. Zemina and prof. PhDr. T. Vlček, CSc. From the attached expertise by PhDr. K. Srp: “[…] To this day, the painting still retains its natural sensuality, indicative of Kupka’s commitment to painting after years of working on illustrations and caricatures. […]” 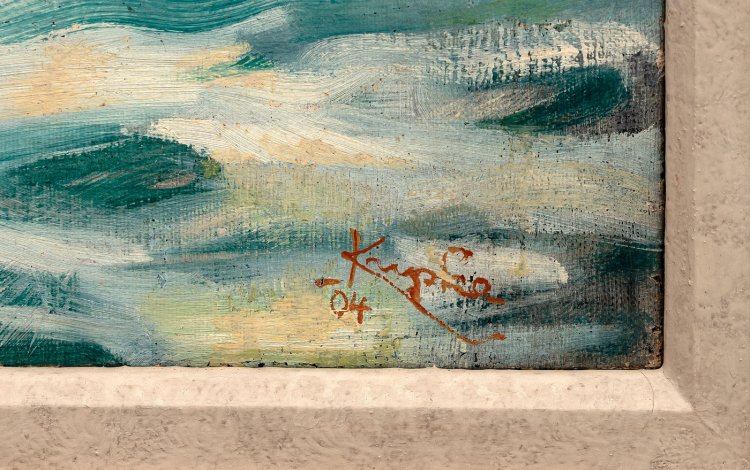 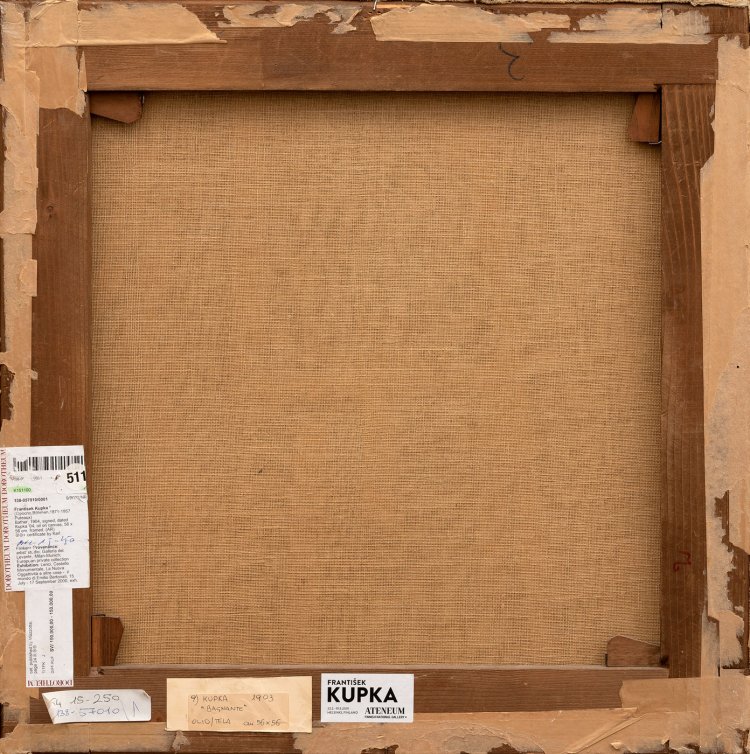