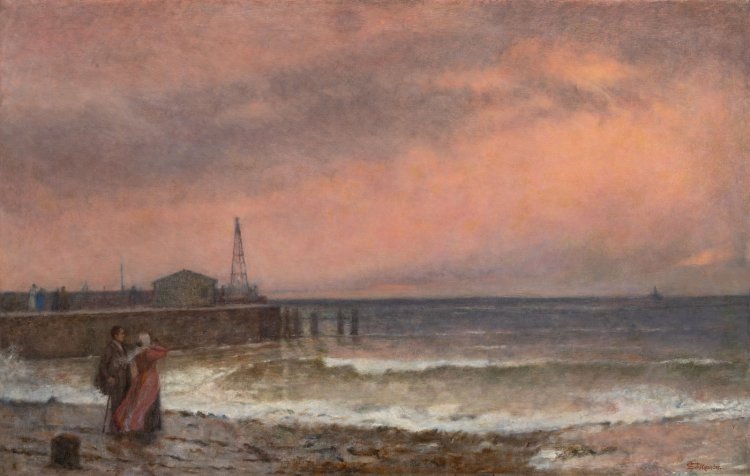 Farewell on the Seashore

The work of Jakub Schikaneder, a unique artist who worked almost equally in the 19th and 20th centuries, gradually crystallised from the beginning, finding new stimuli and constantly developing up until the author’s death, out of the ordinary with no late work stagnation period. Well educated in techniques during his studies at the Prague Academy and in Munich, he initially showed his strong commitment to socially critical scenes. Subsequently, he became inspired by lonely women in the landscape, quiet evening interiors, images of abandoned landscapes, and, in the end, wistful town house interiors influenced by his personal relationship with Prague and its vanishing beauties. The integrating element of all these phases was not only a romantic capture and projection of current moods, but rather a deep introspection into the feelings and pain of a person and the communicativeness of a particular place.

In the autumn of his life, which coincided with the last decade of his work, Schikaneder lived in seclusion. Although he was still teaching at the Academy of Arts, Architecture, and Design in Prague, he limited his social contact to a circle of close friends and collectors who had access to his atelier. In the second decade of the 20th century, however, he fell in love with the island of Helgoland by the northern coast of Germany, to where he repeatedly returned and drew new inspiration from. The turning point was the year 1922, when, after 37 years, he ended his pedagogical activities, had been issued a passport, and together with his wife started extensively travelling to the North Sea coast and Helgoland in particular, which fundamentally influenced the last period of his work. Schikaneder found there the necessary mental stability, which he transformed into a number of mostly large-format compositions with the dominant coast, usually attacked by turbulent waves. It is interesting and at the same time characteristic that, as an urban man and a member of modern civilization, not even here did he seek inhospitable wildlife, but attached the untamed sea element to a fishing pier or a promontory. The mainland was then approached as a safe place with peacefully strolling people or sovereign landmarks of lighthouses or beacons.

This painting with a poetic name Farewell on the Seashore fits perfectly in this period of the author’s work. It also closely corresponds to a set of paintings depicting probably the same locality and recently published in literature (Hulíková, V., ed.: Jakub Schikaneder, 1855–1924, National Gallery in Prague 2012, cat. no. 162–166). The painting can be seen as a distinctive diary entry in which the author materialises the mood of his mature painter’s mind without compromising on the quality and basic principles that unmistakeably characterise his style – matte shimmer, pastel sfumato colours and inimitable softness of shapes speak of the unabated energy of a world-class painter. The presented artwork has indisputable qualities and thus will be an adornment of every prestigious collection. Assessed during consultations by prof. R. Prahl, CSc., and PhDr. Š. Leubnerová. Attached is the expertise by prof. T. Vlček, CSc, together with the expertise and restoration report by the National Gallery in Prague. 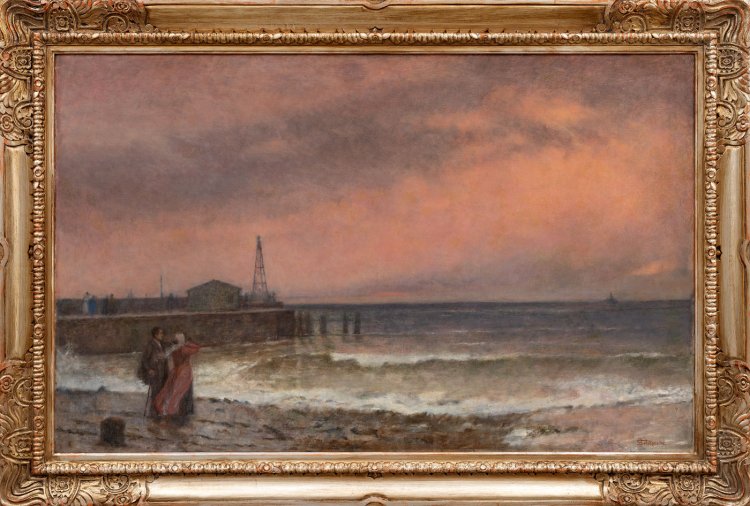