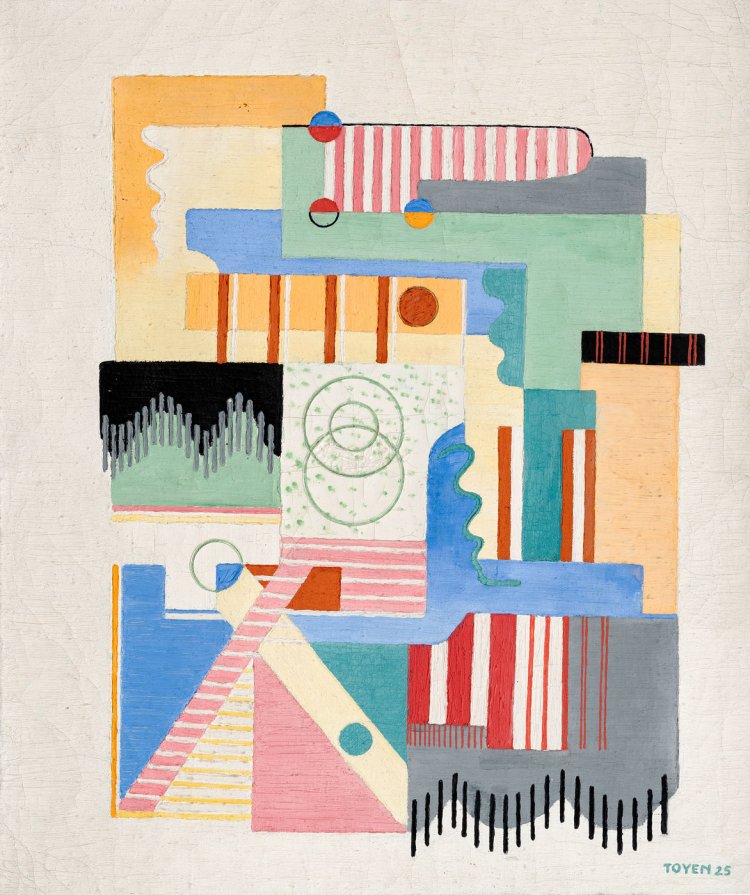 This famous and utterly remarkable canvas belongs among the most fundamental paintings created by Toyen, an iconic artist of the 1920s, and is thus considered to be unique to the art market. The painting was created in the second half of 1925, before Toyen left for Paris where she became a world-famous artist and integrated into the local avant-garde. As early as on the presented painting we can observe the progression of the then only 23-year-old artist, who clearly distinguished her artistic expression towards abstract morphology, however still dealt with subject matters characteristic for the early programme of Devětsil, an association of Czech avant-garde artists which she joined together with Jindřich Štyrský in 1923. These were mainly topics related to marketplaces, circuses, and street jugglers, containing a specific urban tear-up of the fringe of society. Toyen presented here, through the reduction of the illusory space, a fascinating game of shapes and colours, and, using their interconnection and pervasion, studied a number of micro-themes related to the relationship of coloured areas as well as individual horizontal and vertical planes. The conceptual interconnection of circles and twirls responds to contemporary trends of European painting, clearly heading towards non-figurative abstraction, and thus dignifies Toyen to an artist deeply empathising with them. This painting can also be seen as one of the turning points towards Artificialism in Toyen’s artistic development.

From the collector’s point of view, the attractiveness of this work is strengthened by its provenance. It comes from the Toyen’s estate, sold on 21 June 1982 by auctioneer Vincent Wapler in Paris (Succession Toyen, Vincent F. Wapler, 21 June 1982) under the name Composition Géometrique (cat. no. 14); it is included in the auction catalogue and labelled with the estate stamp on the reverse. This was also confirmed by Vincent Wapler himself, as well as Toyen’s friend Annie Le Brun, who found the painting in Toyen’s handwritten inventory, which the artist kept from the 1920s until her death, and which is the main source of determining the authenticity of her paintings. Toyen owned this artwork throughout her life, situated on a place of honour in her atelier. It was also repeatedly exhibited; for the first time under the title Fête Foraine at the exhibition of Jindřich Štyrský and Toyen, which took place in the Paris Galerie d'Art Contemporaine (27 November – 10 December 1926). The painting was published in the monographs and exhibition catalogues: Štyrský and Toyen, Moravian Gallery in Brno, 1966 (the painting was published in the catalogue, though not exhibited); Štyrský, Toyen, Heisler: Musée national d'art moderne, Centre Georges Pompidou, Paris, 1982, p. 13 (under the title La Foire); Rita Bischof, Toyen. Das malerische Werk, Neue Kritik Verlag, KG Frankfurt am Main, 1987, fig. 2; Karel Srp, Toyen, Argo, 2000, p. 36, fig. 28 (the painting was published in the monograph, though not exhibited at the related exhibition, as at that time it already belonged to an unknown foreign private collection). Assessed during consultations by Prof. J. Zemina and PhDr J. Machalický. From the attached expertise by PhDr. K. Srp: “[…] This painting, together with several other works from the end of 1925, thus presents her clear transition to Artificialism. ‘The Fair’ is a great example of the artistic expression of Devětsil. However, although it embodies basic features of its time, it goes beyond. […]” 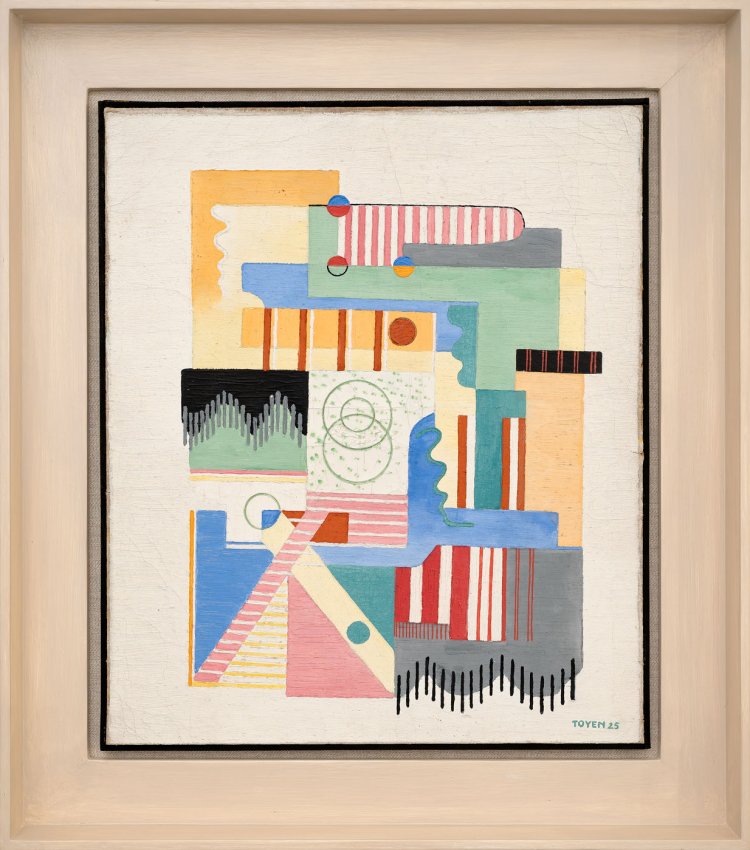 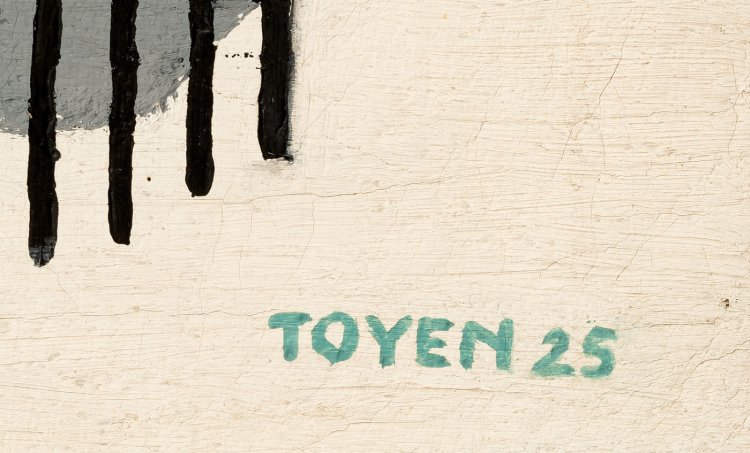