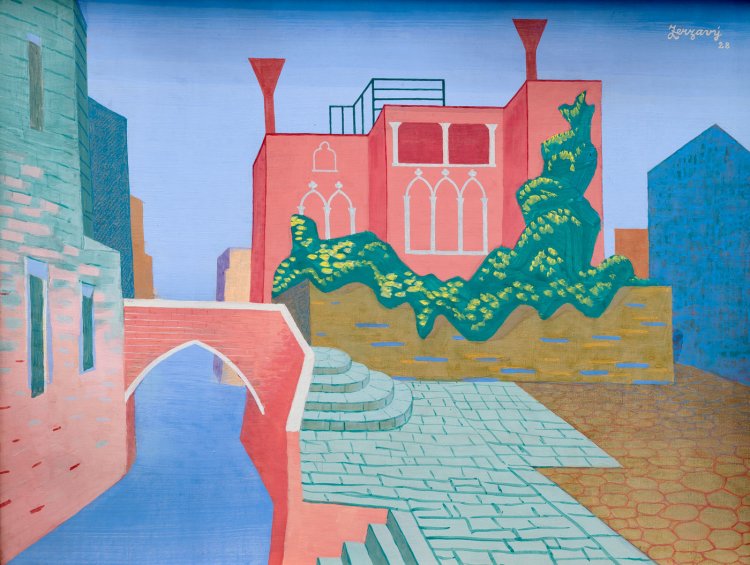 This repeatedly exhibited and published work from the studio of the important and truly unique artist of the Czech art scene, Jan Zrzavý, is an excellent representative of the peak of his creative period. Especially the year 1928 seems to be the beginning of a new stage of his artistic expression, which can be characterised by a great intensity of work and a number of artworks, with the range of subject matters reduced to a few fundamental themes. Zrzavý in particular fell for the charm of Venice, which became one of the cornerstones of his artistic expression. He first visited this romantic city on the lagoon in 1923 during his Italian trip, to return there five years later. Enchanted by the local atmosphere and the very essential charm of the city growing out of the water, he changed his selection of vehicles of expression in favour of an ingenious geometric and planar composition. Using essential figure and volume reductions, he literally composed the architecture of the city into a perfectly stylised landscape reminiscent of a scenic design. The colour palette, in contrast to the earthy scenes of his equally appreciated Brittany, also brightened up with vivid colours, dominated by deep pink, blue, and green tones. He liked to paint his paintings by heart, because that was the only way he could stabilise the infinite number of visual perceptions that this magical destination offered, and free them from everything insignificant. As the artist’s personal records suggest, the same was true of this painting.

The painting was created in the summer of 1928 in the author’s Prague atelier Na Magistrále. In the same year, the work was presented at the painter’s solo exhibition in the Aventine Mansard (Aventinská mansarda; Exhibition of New Paintings by Jan Zrzavý, October 22– December 1, 1928, cat. no. 15). In 1932, it appeared at an exhibition that the author held every other year around Christmas in his atelier. In 2018, the work was on display as part of the exhibition titled Jan Zrzavý of the Private Collections (Museum Kampa, March 24 – July 8, 2018). The artwork was further published in a monograph, which came out after a successful exhibition in 1941 in the Municipal House in Prague (Work of Jan Zrzavý, Prague 1941, no. 83). It was also published in the artist’s monograph by K. Srp and J. Orlíková (Jan Zrzavý, Prague, 2003, p. 269.) The first owner was MUDr. Arnošt Dudek. Assessed during consultations by ak. mal. res. Z. Grohmanová and PhDr. R. Michalová, Ph.D. From the attached expertise by PhDr. K. Srp: “[…] This is one of the most important paintings by Jan Zrzavý, not only of his first Venetian period, but of his entire work. […]” 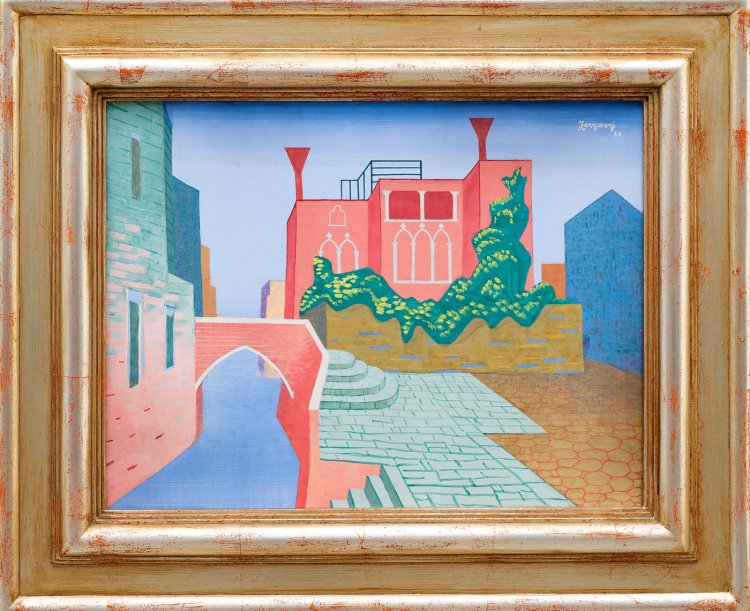