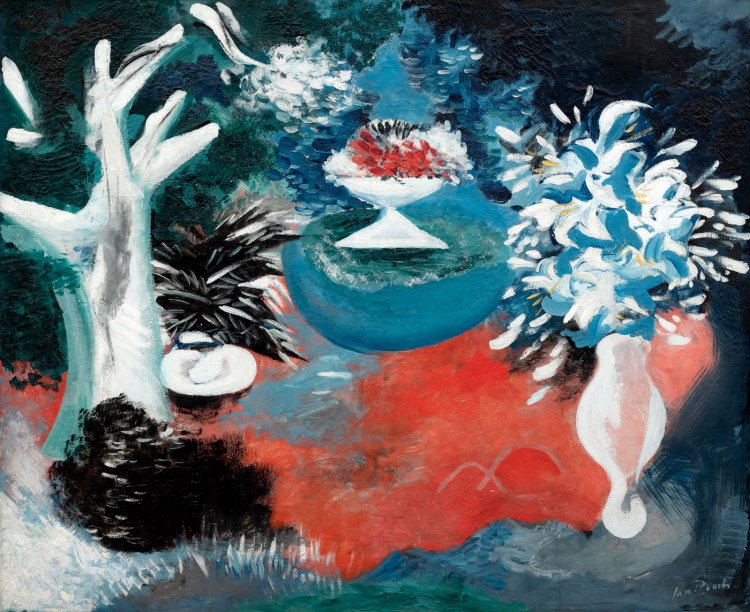 This distinguished painting from the rare interwar period of the 1930s by the excellent artist Jan Bauch represents the peak of his short, yet very significant Poetist period, in which he created imaginative scenes of pastel tones and soft shaping. Bauch conceived of painting as a poem, silent verses living their own existence of shape and colour composed by his brushstrokes on the canvas. In the years 1928–1932, water became a great inspiration to him, especially the captivating landscapes along the river. This time, however, he went much further when the symbolic spheres of the individual motifs in the painting are interconnected, and the author leads us to a view of a white bowl with fruit in the central part of the canvas. The white tree and the white bouquet in the vase seem to recede in front of the beholder’s eyes to give space to this almost magical scene, shaded on the sides by dark thickets. Bauch took his poetist production period to the limits and created a work that, with its composition, is almost close to the surrealist method, but does not lose any of its supreme lyricism and inner depth. As such, the theme of still life which levitates unsettled in the space of a park or a dream garden shows how the painter has thought about the matter of inner relations. The masterful brushwork changes several times in the painting and thus differentiates the individual parts of the canvas. In Bauch’s conception, the individual brushstrokes become vehicles of a thorough expression of his poetic ideas using dynamic, finely modelled brushwork. Work with colour, together with the theme, is thus the main vehicle of expression and its poetic resonance. In Bauch’s work can be found a few artworks with similar composition, for example the smaller format work Garden II from the same year, which was part of the Hascoe Collection, but lacks the central motif of a white jardinière with flowers.

The work comes from an important Prague collection, but was originally part of the collections of the National Gallery in Prague, from which it was returned to a private owner as part of restitution. It is published in the author’s monograph (R. Michalová / P. Kováč: Jan Bauch, Prague 2012, p. 81, fig. 3). The painting is slightly crackled here and there. Assessed during consultations by prof. J. Zemina and PhDr. J. Machalický. The expertise by PhDr. R. Michalová, Ph.D., is attached.