This beautiful drawing by the world-famous painter Toyen belongs to a nine-part collection called Hide Away, War!, which is considered to be very rare and fundamental for Czech art history. It was evident from her childhood drawings that the artist was masterful, which she proved later in numerous illustrations to her author’s periodicals as well as individual drawings. However, it was just during the war when she started creating comprehensive collections, completely different to contemporary tendencies to mythological or biblical subject matters. Thus, an utterly unique work was brought forth, in which a direct reflection of the traumatising experience of the time, presented by themes of perdition and destruction, was embodied together with depressing ambience, perceptible in particular drawings. Realistic depiction in fine ink lines, however, reveals nothing more than what beholders themselves see and infer. Each of the sheets has significant depth of thoughts, emotions and symbolism; we can speak of vintage artwork of European Surrealism at the time of World War II. The collection, named after the quotation of the French poet I. D. de Lautréamont, is an utterly unique and extremely valuable testimony of its time for the history of art.

The arid wide-open space seems to be a scene from a nightmarish dream. Only animals’ skeletons remained in this landscape, thus often set in motion by invisible life force. In this particular case, however, the walking death, symbolised by the skeleton of a moose with large antlers, is accompanied by the rock partridges or hazel grouses, which took over the desert landscape. And yet they seem to be fleeing… This drawing was especially popular with André Breton, who – whilst preparing a summary edition of his book Le Surréalisme et la Peinture – used it as an illustration for the text on Toyen (1965, fig. p. 214).

The whole set of drawings, including this one, was first presented at the artist’s solo exhibition in Topičův salon, Prague (1945, cat. no. 51–59), and subsequently in Denise René gallery, Paris (1947, cat. no. 41–49). The offered drawing was also published in Toyen’s monograph, brought out by Meda Mládková (André Breton, Jindřich Heisler, Benjamin Péret, Toyen, Paris 1953, fig. 59). In the Czech environment, the individual drawings of the set were last presented at the exhibition Czech Surrealism 1929–1953 (Prague 1996/1997, cat. no. 511) and at the monographic exhibition Toyen in the Stone Bell House (Prague, 2000, cat. no. 202). The drawing has also been published in both of the exhibitions’ catalogues. Assessed during consultations by prof. J. Zemina and Mgr. A. Strnadlová. From the attached expertise by PhDr. K. Srp: “[…] The set of drawings ‘Hide Away, War!’, created collaterally with the author’s paintings at the most jeopardising times, is based on paradoxical contrasts in which participates the nature, whether represented by animals and birds, or various tree trunks. […]“ 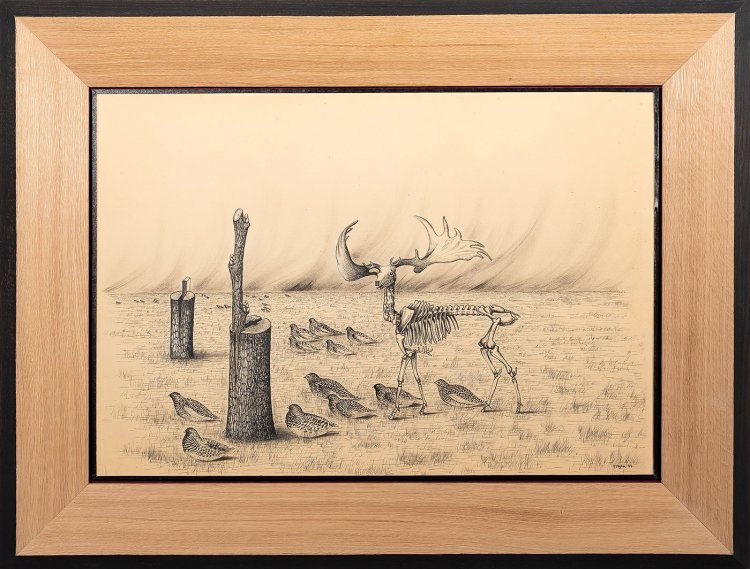