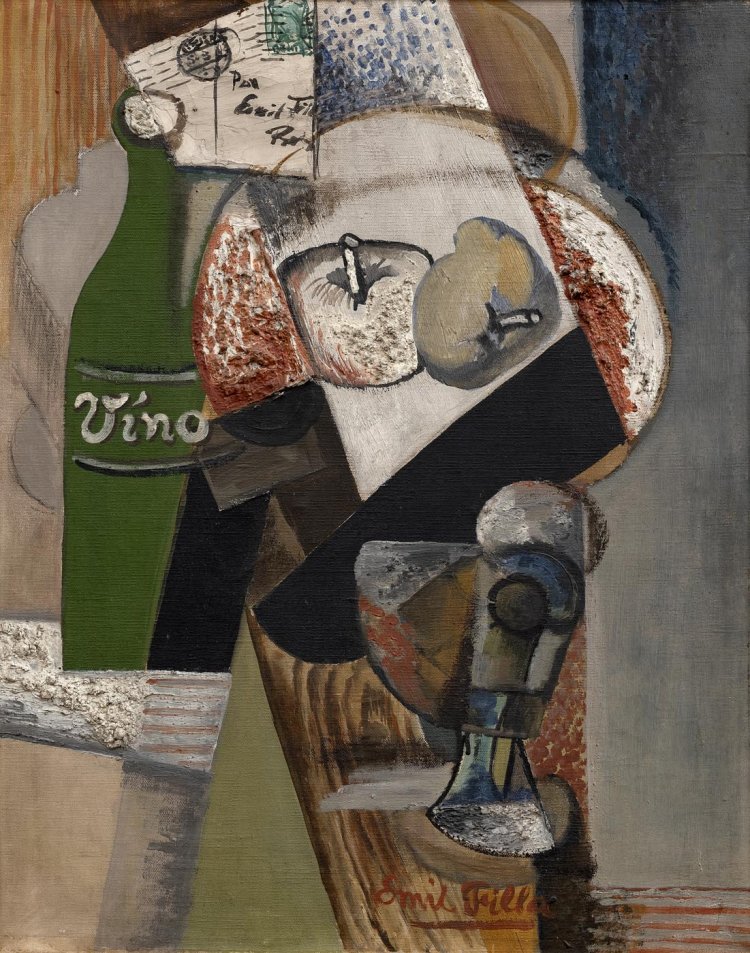 Bottle of Wine and Plate of Apples

This exceptionally high-quality painting represents in all respects the extraordinarily progressive development of Emil Filla, containing all the features of his advanced style in one of his strongest periods, which was for him full of important life changes. This still life also shows that Filla followed his idea with absolute determination, and it can even be considered one of the most sophisticated still life pieces he created at the time. Filla is often labelled as an “intellectual” artist, but Bottle of Wine and Plate of Apples proves how important sensual perception was for him, due to which he was able to loosen the shapes from a strict geometric structure, incorporating references to reality, and work more vividly with colour matter and more freely with depth and plane.

In the sophisticated composition, objects are linearly arranged on the table. A distinctive bottle with the inscription “Wine” catches our attention at first glance. Undoubtedly, the wine has to be complemented with the glass, placed directly opposite; only this way could the ritual of delightful drinking be brought to the desired pleasant end. The intricately elaborated crystalline fractures of the glass profusely expand in space. In Filla’s paintings, a glass became a visualisation of Cubism, via which he demonstrated all possibilities of transforming objects, such as transparency or perfection of form. In the centre of the composition there is an oval indicating a bowl or plate on which two apples are placed, each of which differently shaped, however, in both cases their plasticity and volume clearly stand out. An important item is the envelope with a stamp, postmark and address, which is not finished, and thus it is not clear in which city Filla was staying at that time. The painting presents a very rich, ingenious range of brushwork, including sfumato, impasto, (accentuated by the addition of sand into the colour), and the author’s favourite imitation of a wooden table top. The gloomy Baroque chiaroscuro, typical of this period, is replaced by fresh tones, thanks to which the canvas achieves a visually appealing, almost narrative nature, as if the objects wanted to tell us their own untold story. Bottle of Wine and Plate of Apples proves that Filla’s work consisted of a number of variations and diversions, which confirm that his cubism was not tied down to one scheme, and at the same time foreshadows his further painting development, which was, however, not evident until the 1920s.

The work was provably exhibited twice during the artist’s life, in Prague and Brno, although it cannot be ruled out that the painting could have been presented even before in the Der Sturm gallery in Berlin in late 1913, where Filla presented a larger collection of paintings. Its exhibition here would mean that Filla painted it in Prague in 1913, before leaving for Paris, where he stayed for a long time from the spring of 1914. At the beginning of August, he was, being an Austrian citizen, forced to flee from France to Belgium and then to the Netherlands. Also, the catalogue of the exhibition organised to celebrate Filla’s fiftieth in 1932 states that the painting was painted in Prague in 1913. However, the author’s signature on the back of the canvas puts its origin to 1913–1914, and suggests that the work could have been completed in the spring of 1914, when Filla was still in Prague. Nevertheless, Vojtěch Volavka mentions the completion of the painting in Paris, but it is hardly conceivable that Filla would travel from Prague to Paris with the painting. Thus the first documented exhibition of this still life took place at Filla’s fundamental exhibition, organised in Prague’s Mánes for the occasion of his fiftieth birthday (May 1932, cat. no. 48) and subsequently on its reprise in the House of Arts in Brno (October 1932, cat. no. 5). The still life is listed in the exhibition catalogues from 1932 (Jubilee exhibition of the work of Emil Filla, SVU Mánes, Prague 1932, cat. no. 48; Collective exhibition of paintings organised by the Group of Fine Artists (Skupina výtvarných umělců) in the House of Arts in Brno, 1932, cat. no. 4). It was also published in an article on the collection of Armand Grosz by Vojtěch Volavka (Volné směry, XXXIII, Prague 1937, pp. 83–86 under the title Still Life with a Bottle of Wine and Fruit) and is mentioned in the publication by Vojtěch Volavka from 1961 (On Modern Art (O moderním umění), Prague 1961, pp. 198-199). It is also included in the artist’s fundamental monograph by Vojtěch Lahoda (Academia, Prague 2007, p. 209, fig. 187). The value of the artwork is enhanced by the origin from the collection of the important collector Armand Grosz and its listing in the artist’s personal inventory, where it appeared under no. 71. The authenticity of the work was verified by the Filla Foundation and it is also listed in the inventory of works prepared by prof. V. Lahoda, CSc. Assessed during consultations by doc. T. Winter, Ph.D., and PhDr. R. Michalová, Ph.D. From the attached expertise by PhDr. K. Srp: “[…] This still life is therefore a great combination of Cubism and Primitivism, two dominant artistic movements before 1914. This painting can be considered one of the most important painted by Filla in the period of 1912–1914. Filla based it on a tension between the various extents of the depiction of reality. […]“ 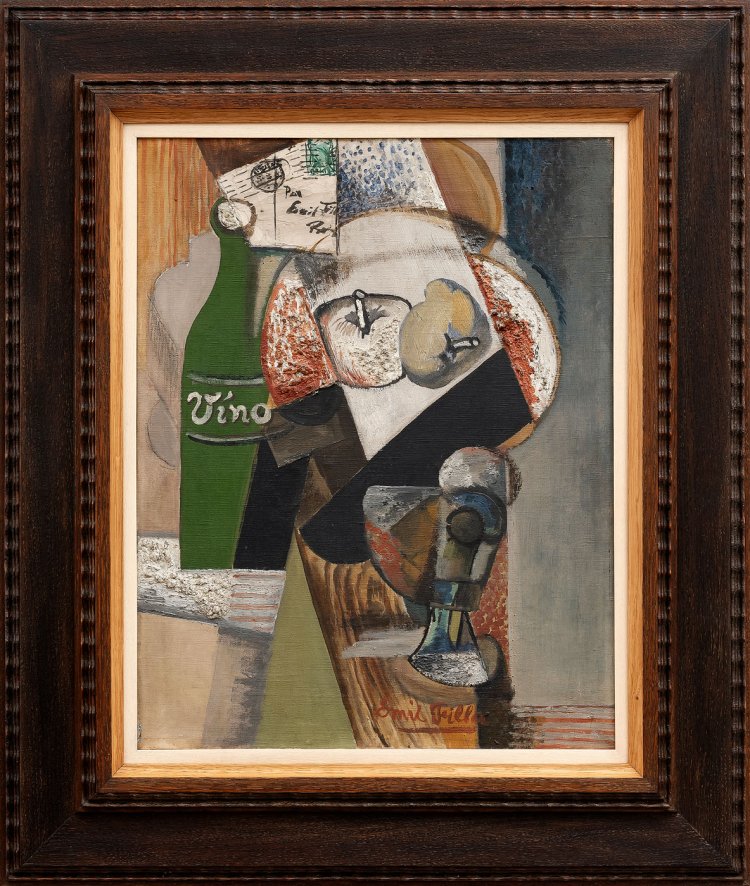