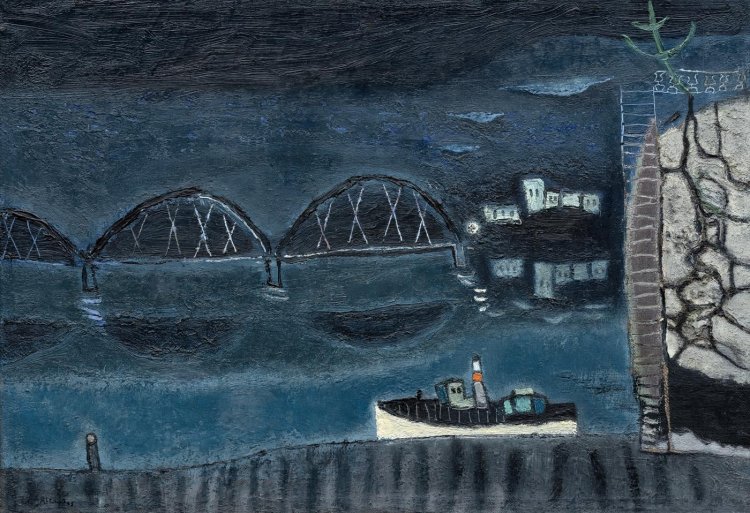 Evening on the River

This remarkable painting is an exceptionally rare example from the author’s very early and high-quality period, anticipating the creative peak of his work. Magical abstractions based on the aesthetics of East Asian characters, transformed through the artist’s brush into fantastic and structurally distinctive works, was actually anticipated by fragile, sometimes even naïve art style, which, however, was marked by strong sensitivity and dreaminess. We can observe in Sklenář’s works from the period before his first trip to China in 1950s, same as in the works of members of the Group 42 (Skupina 42), occasional fascination by an urban landscape and atmosphere. He approached it, however, with his individual style and gentle poetics, as presented in the painting Evening on the River. The night scene with his favourite motif of a steel railway bridge and white houses, whose shine is reflected on the dark water surface, is not solitary in his work. Most of his works from this period are immersed in the darkened atmosphere, which fascinated him at the time and thanks to which an individual elements of this painting gained an almost imaginative character. The darkness in this work also erased the horizon, and so the whole scene seems to be under the mantle of sleep.

The painting was presented at the exhibition Guests of Mánes (Hosté Mánesa, Prague, 1943, cat. no. 146) and also at the author’s first solo exhibition in Topičův salon (Prague, 1946, cat. no. 7). Assessed during consultations by prof. J. Zemina and PhDr. J. Machalický. From the attached expertise by PhDr. K. Srp: “[...] The night allowed him to embroider the contrast of black and white. Part of the stone embankment represented a psychological boundary, suggesting a possible entrance to the ship, on the hull of which one cannot fail to notice the red and green colours, one of the few that enliven the darkened scene. The painting that the author created during World War II goes far beyond everyday experience. [...]”