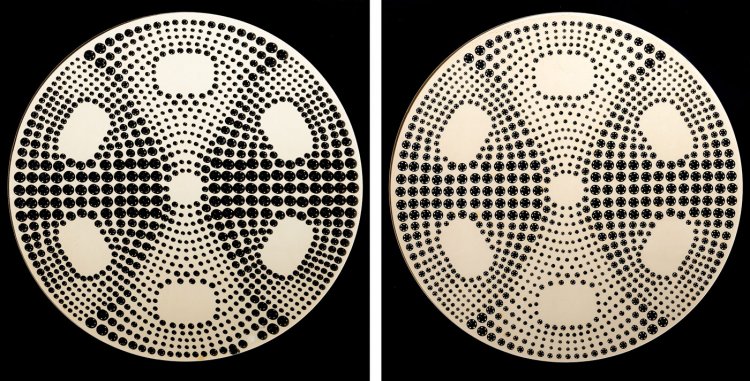 This unique work, which very rarely appears on the market, is a stunning example of the work of the long-neglected Běla Kolářová. In her work, she brought her own unmistakable expression, based on the women’s world with its intimacy and close relationship to home. Her artistic work is based on constant testing of various expressive and technical possibilities; it reflects everyday encounters with the most ordinary objects. Běla Kolářová is one of the most original Czech artists of the second half of the 20th century, yet this remarkable author was not fully appreciated in the Czech environment until 1989. International success and full appreciation of the significance of her work began with her participation in ‘documenta 12’ in Kassel, Germany in 2007. This is where the diptych Large Snap Fastener (Scattered) was exhibited and subsequently purchased by the prestigious Kontakt Collection gallery, Vienna, representing the highest quality collection of unofficial art from the 1960s to the 1980s from the countries of the former Eastern Bloc. After the solo exhibition of Běla and Jiří Kolářovi at Art Basel in 2012, institutions such as MoMA and Tate Modern also bought Běla Kolářová’s works in their collections. The increased interest in the work of Běla Kolářová is related to the appreciation of the importance of female artists in post-war art, which has become a phenomenon in recent years.

The turn of the 1960s and 1970s, where also belongs the date of origin of the presented work, is considered to be the author’s most important creative period. Běla Kolářová created at that time a series of assemblage diptychs of snap fasteners, objects so simple and feminine, arranged on square plates. Thanks to the contrast of black and white, the different sizes and thickness of the individual parts of the snap fastener, she was able to put together captivating optical reliefs. She based the principle of their arrangement on her experience with photography and its polarity, which in each part of the diptych gives a performance in front of the onlooker’s eyes, the meaning of which is amplified by its duality. However, the composition of the work in the context of other diptychs, having the subtitles “Scattered” or “Star”, is also related to the emotional side of Kolářová’s work.

The uniqueness of this artwork, and its extremely rare appearance on the auction market, is enhanced by the fact that only a few diptychs were created, some of which are now in major world-known collecting institutions, such as aforementioned Kontakt Collection gallery. The work is in its original condition. As evidenced by the stamps on the reverse, it was exhibited at a monographic exhibition in Litoměřice in 1997 and in 2003 at the Amos Anderson Art Museum (Amos Andersonin taidemuseo) in Helsinki. It was also exhibited in the National Gallery in Prague (Běla Kolářová, Trade Fair Palace, Prague 2006, published in the catalogue, pp. 62–63) and in Olomouc at the exhibition Experiment, Order, Intimacy: The Feminine Patterns of Běla Kolářová (Olomouc Museum of Art, 2006, published in the catalogue, cat. no. 205–206, pp. 88–89). Assessed during consultations by prof. J. Zemina and PhDr. J. Machalický. From the attached expertise by prof. doc. PhDr. Marie Klimešová, Ph.D.: “[...] In Large Snap Fasteners, she created a conceptual pair of circles, the hypothetical fastening of which would create a single object. Such an intellectual operation is made possible by the organisation of the material on the surface: Kolářová separates the mutually different technical components of the snap fastener into two parts of the diptych and composes them as a mirror image – complementary, so that they come together when ‘fastened’. In the ‘disconnected’ version, the different mass of the snap fastener parts simultaneously creates an artistically subtle but impressive distinction between their relief nature and luminosity. [...]”