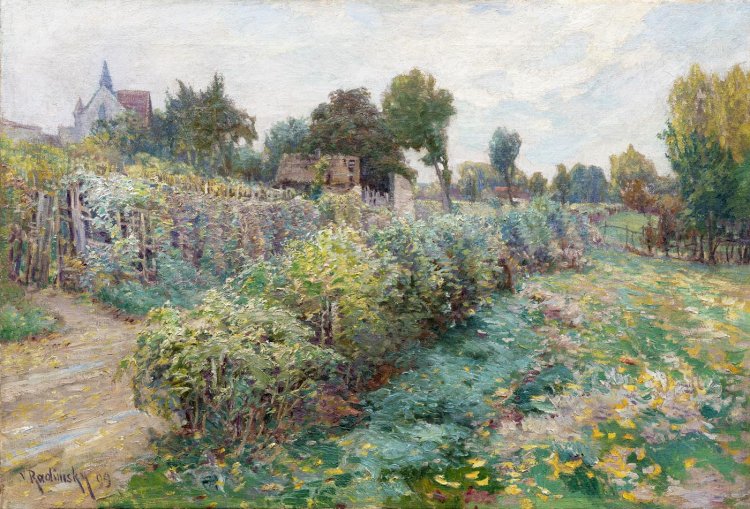 French Village with a Church

From a compositional and colouristic point of view refined landscape, captured with an impressive rendition, which provides a rare insight into the most sought-after period of the author’s work just before 1900. Radimský was at that time based in La Bergamotte, Le Goulet close to Vernon. Through his residence in Barbizon, an extensive collaboration with Claude Monet in Giverny, and even being accredited with a gold medal at the Salon in Paris, he became a fully established and acclaimed artist in France. In 1899, he exhibited for the first time in Prague, in Topičův salon. He presented a representative collection of 88 paintings, whereby he directly acquainted the Prague audience with French Impressionism; the exhibition was very successful and, even more, one of the paintings was bought for the Pinacotheca in Munich. With tireless diligence using an effective technique of single short brushstrokes, Radimský perfectly captured in French Village with a Church the trembling and movement of each leaf. Following the French examples, he also paid attention to depicting the airy atmosphere, which seems to be almost tangible, and to the light, which, thanks to the suitable base and subtly laid colours, allows the painting to brightly shine.

In 1884, Radimský himself took a portrait of the aforementioned Claude Monet, resting on a sunny day by a dusty road lined with old bushes. The presented painting shows the same visual and colouristic features, and thus can be seen as a parallel to this artwork – their mutual resemblance evokes to the beholder almost a physical presence of the great master, having lunch hidden in the bushes away from scrutiny of his admirers.

In addition, the work comes from a high-quality Prague First Republic collection and is presented in a period carved Florentine frame; perfectly representing the author’s work from his most sought-after period. With its quality and indisputable charm, it stacks up to the best contemporary French paintings of its kind and undoubtedly deserves the attention of every true art lover. It would hold an honourable place in any important collection. Works of comparable style and rendering, depicting similar location, can be also found in the author’s last monograph (Blažíčková-Horová, N.: Václav Radimský, 1867–1946, Řevnice, 2011, cat. no. 29 and 43). Assessed during consultations by prof. J. Zemina and Mgr. M. Dospěl, Ph.D. The expertise by Mgr. P. Kubík is attached. 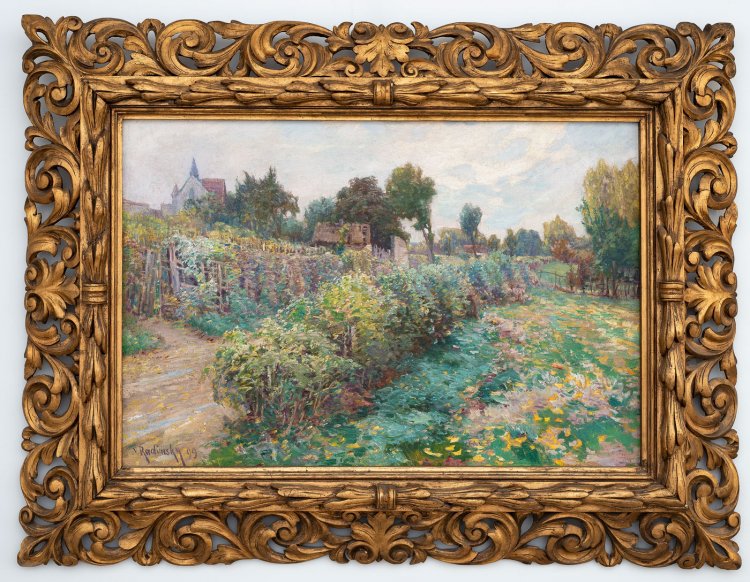