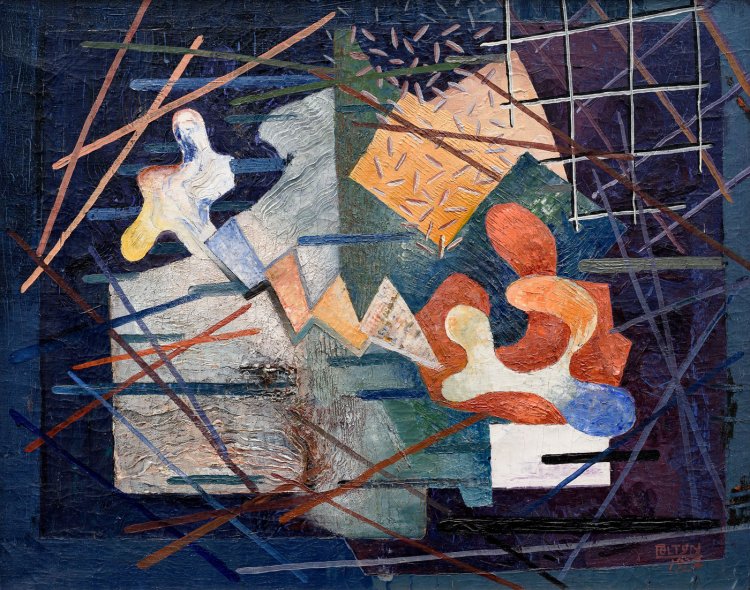 Such an excellent work of high value for galleries and collectors rarely appears on the market and is an absolutely exceptional representative of the artist’s significant period of 1927–1928, during which he fully developed his abstraction and began to establish himself on the international art scene. Foltýn spent the years 1923–1933 in Paris, and thus, as one of the few Czech artists, had the opportunity for a long-term confrontation with the most current artistic affairs. This young, talented painter carefully studied the laws of structure, composition, shape, and elementary colours so that he could very soon develop himself towards a special concept of abstraction. He became a member of the important group Cercle et Carré, whose program was to “humanise geometry and geometrise humans”. He was also one of the founding members of the Abstraction-Création art association, which included him alongside personalities such as Hans Arp, Robert Delaunay, Henry Moore, and László Moholy-Nagy.

The presented painting comes exactly from this very important French period. Foltýn put us in front of a brilliantly set-up scene, which, even without the presence of a specific human footprint, seemingly pulsates with energy. He inserted a living tangle of diverse amorphous and geometric shapes of various colours and structures into the captivating depth of the dark background, evoking the impression of an incomprehensible and never-ending space. An extraordinarily well-thought-out composition of individual disparate elements, which evoke a feeling of constant action, origin, and extinction, irritates the beholder’s senses, attracts their attention, and brings them deep into the world of their own subconscious. Based on personal knowledge and immense talent, the painter created a work presenting his own concept of abstraction which reaches the world-class level. This work was published in the artist’s monograph (J. Hlušička, Brno 2006, fig. 82, 83) and comes from an important Moravian collection. Assessed during consultations by prof. J. Zemina and PhDr. R. Michalová, Ph.D. From the attached expertise by PhDr. K. Srp: “[...] Foltýn’s painting dates from 1927, from his most important period, when in Paris he systematically worked his way up to his own conception of abstraction, although he had previously dealt with very successful realistic works, focusing on landscapes and figural scenes. In Paris in 1925, he got into a completely different atmosphere, which had a significant effect on him. He attended František Kupka’s lectures, watched the immediate artistic happenings, and met Jindřich Štyrský and Toyen. Foltýn began to create his world here from the very beginning, as if he was learning to paint again from the simplest possible strokes and colour contrasts, he threw away all the methods he used until 1925. […]“