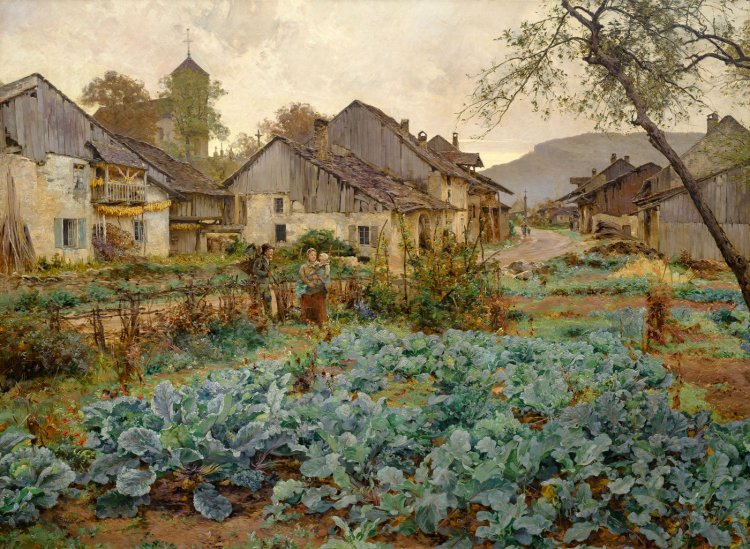 During his lifetime, Václav Brožík was one of the most respected artists of his generation. He belonged among the top representatives of academic painting, embracing both high-class historical genres, and rural topics of ordinary life which were appreciated by a broader audience. This subject-matter began to show off more significantly in his works from the mid-1890s, at a time when he travelled to Brittany and Normandy, and whilst working in the surroundings of the Ambleville Castle which belonged to his father-in-law. Since then, the rural and seaside atmosphere became an increasingly welcome source of inspiration to him and a necessary balm to his soul and weakly body. Following the French tradition, represented mainly by Jean-Francois Millet, Jules Breton, and Jules Bastien-Lepage, he expressed an inclination to manifestations of compassionate realism, depicted with pleasure and in innumerable variants. The presented canvas ranks among the top artwork of this kind. On the one hand, Brožík achieved the goal of the utmost realism, but at the same time he was able to balance the exact detail with a harmonious and logically structured composition. With photographic accuracy, he managed to portray the vegetable field in the front plan, the hanging corn cobs, and every board in the gables of the poor houses. The shift from the aesthetics of smooth academic painting to a certain kind of naturalism aptly points to a fundamental modern update in Brožík’s late work. In comparison with his other works, the staffage is not that much emphasised, its scale is smaller, and it’s overall of a lower importance. The subject-matter was mainly the landscape, or more precisely an effort for the utmost realism of the overall composition and its particulars. Perhaps we can seek for a deeper message of the scene in eternity symbolised by the church on the hill and the hard work to earn the peasant’s living, which are united in the sign of the cross, depicted on the painting several times. The painting is of high value for collectors as well as galleries. Assessed during consultations by prof. R. Prahl, CSc., and doc. M. Theinhardt. The expertise by PhDr. Š. Leubnerová is attached.