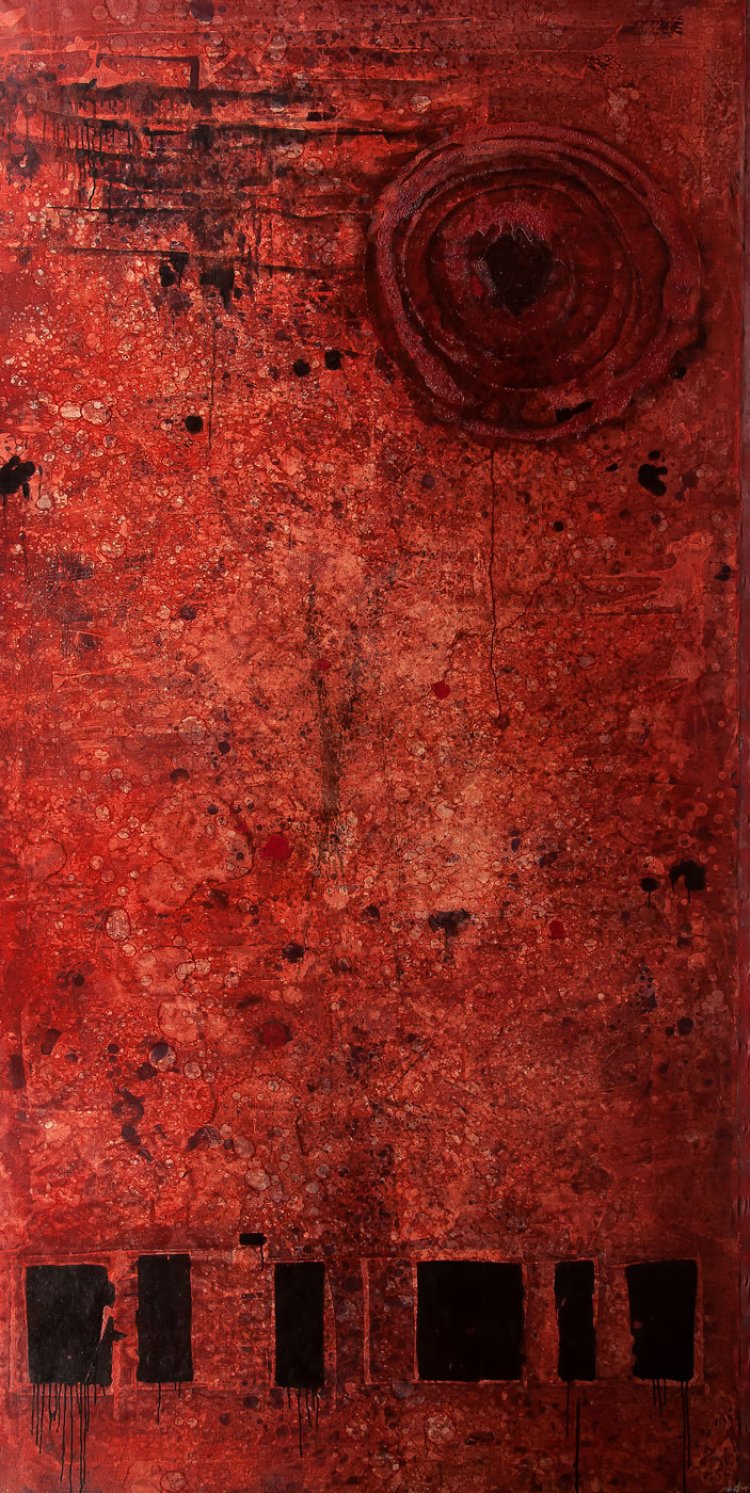 Wall Panel for the Representative Rooms of Czech Airlines in Košice, Part XI

This captivating large-format work of one of the most prominent Czech post-war artists comes from Medek’s peak period of the 1960s, which was marked by an extensive creativity and the search for a new artistic expression. At that time, the artist’s attention diverted from subject-matters based on brutally deformed mostly female figures to focus on stronger stylisations losing descriptiveness and detail, through which he gradually developed to a completely abstract rendering. During the 1960s, Medek dealt with two main types of commissions: paintings for church interiors, and interior decoration for Czech Airlines. The presented painting comes from the set of fourteen wall panels, unfortunately no longer existing as a set anymore, which he executed for the representative rooms of Czech Airlines in Košice. Overall, the set of paintings had an unusual, fresh impression and internal monumentality, which, however, has been preserved by the individual paintings as well. Although Medek planned the set as a whole, it is also clear that he approached each panel independently. The presented work, one of the final ones of the set, fully presents Medek’s poetics of the early 1960s, and his talent and capacity to work with the power of colour and its substance. The expressiveness of the canvas is accentuated by a wrinkled, dense monochrome surface, which almost gives an impression of living human body tissue. The composition is divided in the upper part by concentric circles with a dark centre and in the lower part by six rectangular holes, from which the colour still flows freely on the red surface, raising strong emotions in the beholder that remain imprinted in their memory. This painting was exhibited at the artist’s monographic exhibition Naked in the Thorns in the National Gallery in Prague (10. 9. 2020 – 31. 1. 2021). It will also be reproduced in the upcoming monograph by PhDr. K. Srp and included in the inventory list. Assessed during consultations by prof. J. Zemina and PhDr. E. Kosáková-Medková, art historian and the artist’s daughter. From the attached expertise by PhDr. K. Srp: “[…] Medek developed his own artistic character set, which was unparalleled in Czech art. Medek approached each commission with a true artistic responsibility. This is also shown by this wall panel, which has the same intensity as his concurrently executed autonomous paintings. As a whole, the work was to be part of a permanent collection of Czech modern art, but even its individual pieces are a source of strong visual delight for any collector. […]”