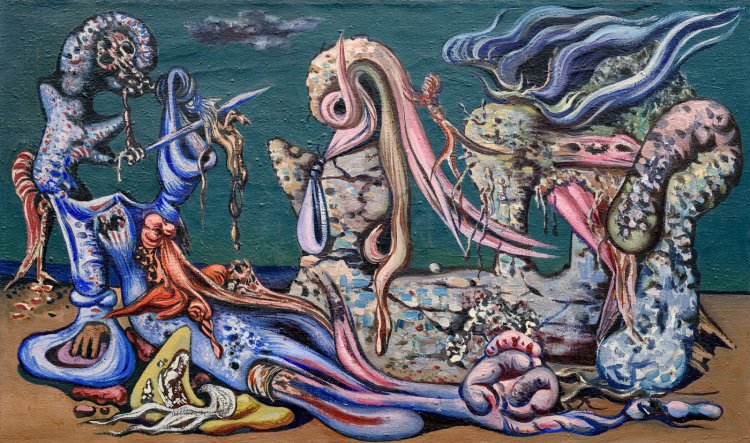 This very impressive work entitled Spanish Walls represents the late, but all the more distinctive work of the solitaire of Czech surrealism, František Janoušek. The final period of the artist’s work was characterised by a very suggestive feeling of the difficulty of the pre-war and war epoch, which is reflected in his paintings by a radical transformation of shapes and subject-matters. Janoušek was a very kind and attentive man, and his empathy was also manifested in his ability to reflect the pathological changes of society leading to violence and war. Unlike the optimistic artworks he presented at the legendary exhibition of Czech surrealism, Poesie 1932, the paintings created around 1938 are dark and excruciating, succumbing to the destructive and uncontrollable forces of evil. The painting Spanish Walls gives evidence of the artist’s continuous interest in the Spanish civil war, which he already presented in 1936 in the painting entitled Spain, above all proving his sensitive recognition of the growing distress of the Czech environment in the 1930s. The figural scene in the presented painting looks miserable; the tangled biomorphic shapes representing the figures look sick and painful. The iconography approximates his work entitled Evening May from 1936, which appeals similarly helplessly against the will of the violent captivator. In addition, the absolutely immersive scene is intensified by the disharmonious shades of flesh colour and the bleak green-grey tones. This painting represents a climactic combination of Janoušek’s two previous approaches – expressive plasticity and psychological-ecstatic rendering. This work comes from the artist’s peak and coincidentally final creative period. Its uniqueness and exclusivity for collectors is enhanced by the fact that it has been published several times in important publications dedicated not only to this author, but also to the whole art period, for example in an article by František Šmejkal: The Art of Protest. The Czech avant-garde during the Spanish Civil War (Umění XXVI, 1978, no. 3, pp. 263–276). Jindřich Chalupecký mentioned this painting several times in the artist’s monograph published in 1991 by Odeon publishing house, where it was also reproduced in colour (fig. no. 116). It was also exhibited and published in exhibition catalogues multiple times, for example: František Janoušek, SVU Mánes, Prague, December 1947 (cat. no. 76); La peinture moderne Tchécoslovaque, Antwerp, Brussels, Liège, 1948 (cat. no. 21); Imaginative Painting, Aleš South Bohemian Gallery, Hluboká nad Vltavou (cat. no. 23), the exhibition took place in 1965 in the Museum of Decorative Arts in Prague; Arte a Resistenza in Europa, Bologna, 1965 (there is only the list of artists in the catalogue); František Janoušek, 1965, Nelahozeves Chateau, Central Bohemian Gallery in Prague (cat. no. 110); it was also presented in the rerun of this exhibition in Prague, held in Mánes in 1966 (cat. no. 45); František Janoušek, Opere Scelte 1933–1942, Galleria Schwarz, Milan, 1969 (no. 11), reproduced in the exhibition catalogue; František Janoušek, House of Arts, Brno, 21 May – 30 June 1985 (cat. no. 67); Czech avant-garde for Spain, Small Fortress, Terezín Memorial, June – August 1987 (cat. no. 21), reproduced in the exhibition catalogue; last time exhibited at František Janoušek, Mánes, Prague (19 November 1991 – 1 January 1992, cat. no. 85). The work comes from the artist’s estate and will be included in the inventory of his work in the upcoming monograph by PhDr. J. Vykoukal. Assessed during consultations by prof. J. Zemina and PhDr. J. Machalický. From the attached expertise by PhDr. K. Srp: “[…] This painting comes from the final period of work of František Janoušek, in which his imagination from the mid-1930s culminated. It fully expands on its biomorphic, extremely original surrealist morphology, which can express a complex narrative full of allusions, containing a number of symbols and allegorical subjects. It is a stratified multi-figure scene through which, in a way, Janoušek expressed his attitude towards the complex situation of that time, and in particular towards the tense events in Spain, as he was doing through his paintings in general, presenting his opinion as an artist as well as a person. […]“ 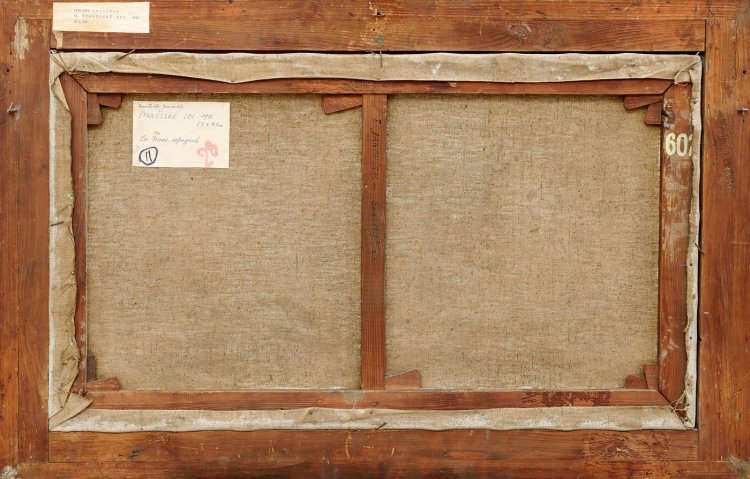