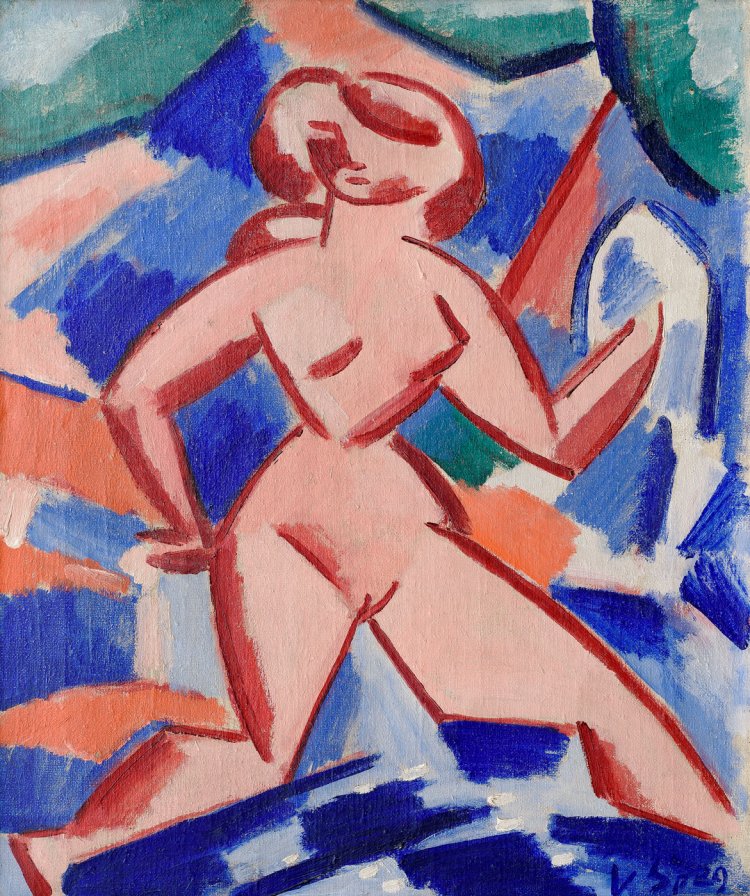 This excellent painting of a unique exhibition history by Václav Špála falls into the strongest period of his work, the 1920s, and presents him as an absolutely sovereign painter. This currently highly valued and sought-after artist did not finish his academic studies at both Prague art schools due to excessive lack of creative freedom and differences of opinion. Instead, he embarked on a free, unlimited search for his own modern expression. In 1911, he made his first trip to Paris, which brought to his style the influence of French artists and enchantment with the world of suggestive colours and shapes. His style relaxed and his colour range changed, becoming brighter and clearer. It was at the end of the 1920s that he returned to the subject-matter of seasons, personified in female figures. In the presented canvas, Summer, we can find a completely unique embodiment of the whole summer atmosphere. The naked female body as well as the water surface, which reflects the pinkness of her skin, are depicted in a sophisticated cubist rhythm of coloured areas of the canvas. This artwork is considered truly exceptional, emphasising Špála’s enormous talent, and ranks him among the most important Czech artists of the 20th century. It originally belonged to the property of František Čeřovský, from whom it later got into the famous collection of Dr. J. Borovička. The painting was exhibited in 1935 at the artist’s solo exhibition in Mánes (cat. no. 101), and also in the same gallery at the exhibition Václav Špála: Figural Motifs (cat. no. 107). In 1966 it was also presented, for example, at the exhibition Paris–Prague 1906–1930 (cat. no. 113) and in 1967 at the exhibition Cubist Art from Czechoslovakia at the Tate Gallery in London (cat. no. 102). The work is listed in the inventory of Špála’s work (eds.: E. Burget, R. Musil, Prague 2002, p. 61) and numbered by the artist (no. 418 in a circle) on the stretcher. Assessed during consultations by prof. J. Zemina and PhDr. R. Michalová, Ph.D. From the attached expertise by PhDr. K. Srp: “[…] The painting, depicting a nude young woman standing on rocks by the sea with green trees in the background, dates back to the years when Špála dealt with figural subjects only occasionally; mostly with his family members, close friends, and occasional portraits. He apparently had to have his reason to return – even several times – to the topic of seasons. It was most likely initiated by the architect František Kavalír, who owned all four paintings of the Seasons. Špála also executed one more painting of Summer, traded by Hugo Rottenberg, and Autumn, traded by Otakar Štorch Marien. Summer, embodied in a young woman’s nude, is characterised by an obvious dynamism, a swift body movement, and a strong gaze on the beholder. It is a great example of Špála’s modernism. […]” 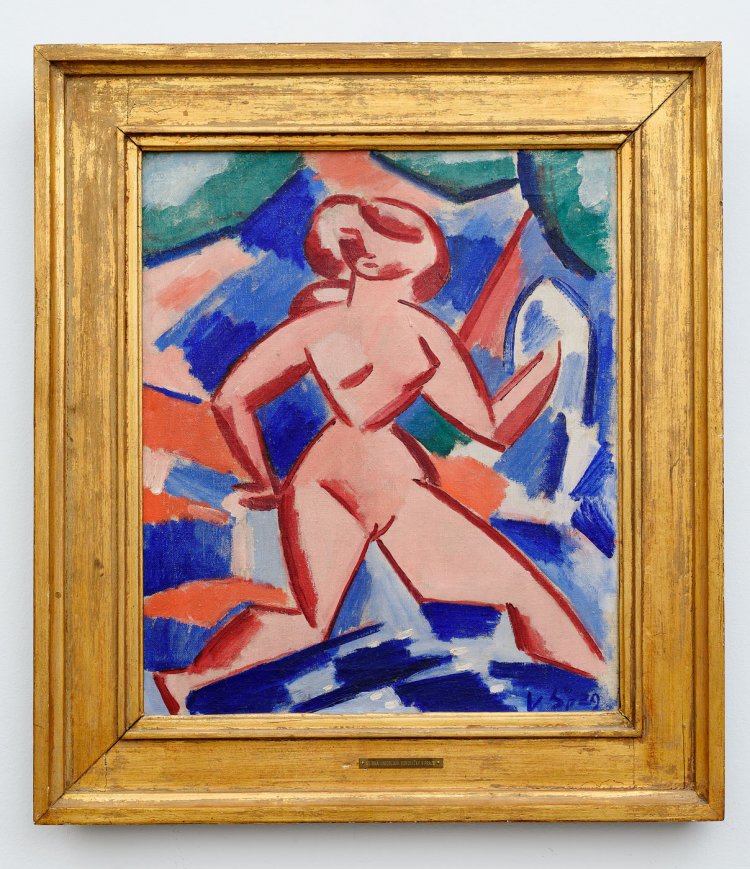 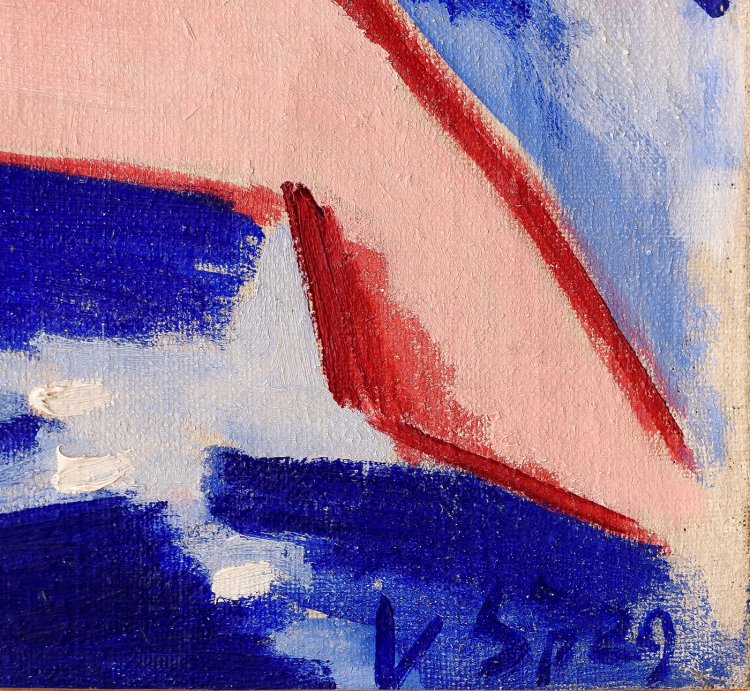 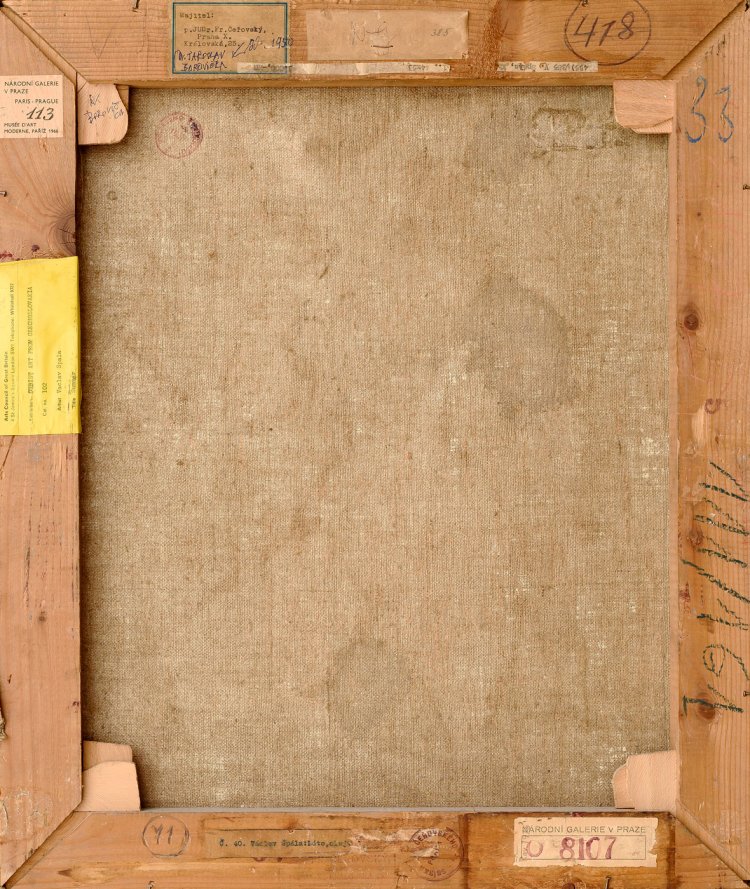