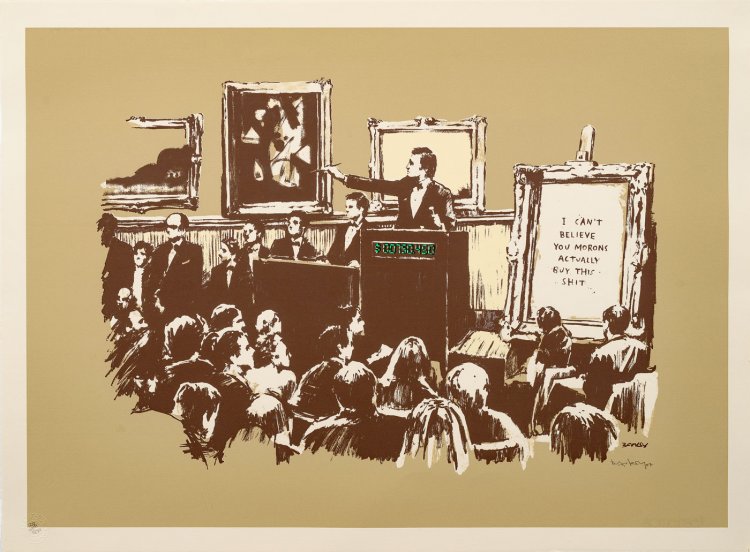 This famous and sought-after screenprint entitled Morons (Sepia) represents a characteristic, street art-based style of one of the most prominent and world-famous contemporary artists. Performing under the pseudonym Banksy, his real name and identity still remain unconfirmed and are the subject of speculation, but it’s known that he has roots in the Bristol underground scene of the 1990s. His legendary street art works, executed in a distinctive stencilling technique, have appeared in the streets of cities around the world. The use of stencils helps him to minimise the time of creation, which is based on the nature of illegality of street art, and thus the need to create quickly. He claims he changed to stencilling whilst hiding from the police under a rubbish truck, when he noticed the stencilled serial number. The Morons (Sepia) screenprint was first sold during his major Los Angeles exhibition entitled Barely Legal in 2006. In addition to prominent art historians and art critics, film stars including Angelina Jolie and Jude Law took part in this three-day show. At this early point in his career, Banksy already had a reputation as a controversial and inspiring rebel. The exhibition supported the integration of street art into world galleries and guaranteed Banksy a prominent place on the pedestal of this street art-inspired style. The inspiration for this print was the successful auction of Vincent van Gogh’s Sunflowers at Christie’s, London, in 1987. The value of the artwork then reached 22.5 million GBP, making Sunflowers the most expensive artwork sold at auction at the time. Despite the ironic character of the print, which in fact mocks its own collectors, Morons (Sepia) has become one of the most popular on the market and has therefore been released in several editions: the original monochrome edition with a gold frame (published in 2006 by Modern Multiples, 500 unsigned and 150 signed copies), the second monochrome edition (published in 2007 by Pictures on Walls, 500 unsigned and 150 signed copies), and the last, sepia edition, from which this print comes (300 signed and certified copies). Banksy displays his art mostly in public places; his paintings and graphics appear very rarely on the art market, and are thus appropriately highly valued. At the auction of Sotheby’s, London, dedicated solely to Banksy’s prints, Morons (Sepia) was sold for 107,100 GBP. Assessed during consultations by PhDr. Karel Srp and Mgr. Milan Dospěl, Ph.D. The expertise by Matyáš Kodl, MA, is attached. 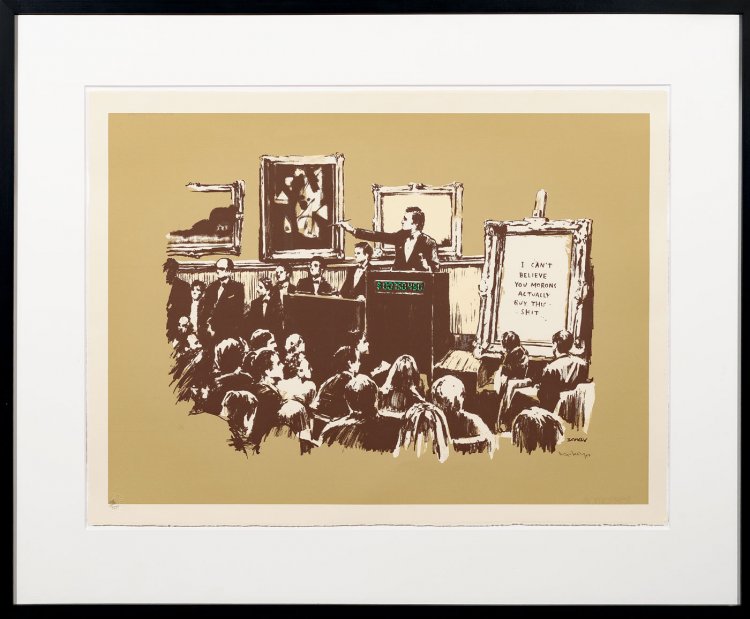 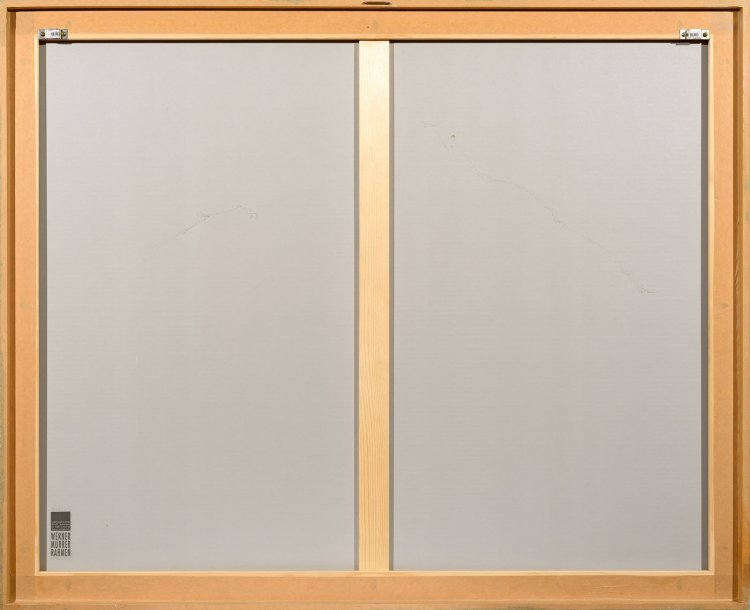