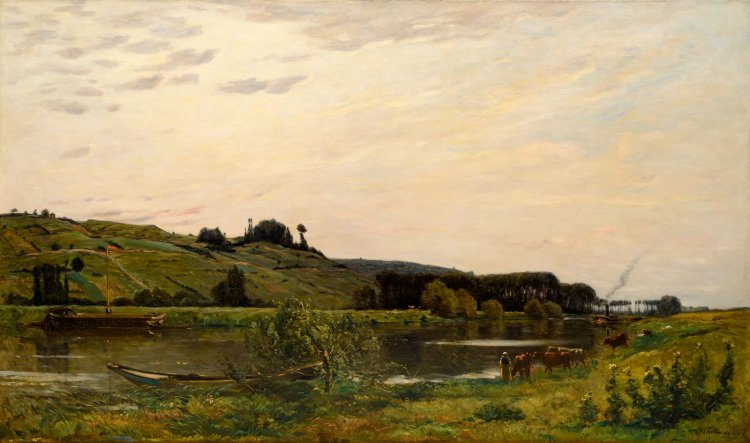 In a short time, Antonín Chittussi was able to execute an extraordinary number of paintings and drawings of high artistic value and international quality level. This canvas with the poignant title French Monumental Landscape can be understood in relation to his other works as an exceptional synthesis, where the artist, at the peak of his creative capacities, combined previous efforts and experience into one of his undoubted chef-d'oeuvre. It would be difficult to find similar works by Chittussi in private collections, and therefore we need to reach for comparisons into the collections of the National Gallery in Prague, where only a monumental depiction of Seine at Puteaux from 1883–1884 (inv. no. O 687) competes with the presented canvas. Close affinities can also be seen in Landscape with Boats and Sunset from the collections of the Gallery of West Bohemia in Pilsen (inv. no. O 650). The centre of the artwork, with its dominant high sky, low horizon, and many details, is formed by a calmly flowing river with boats and a prominent steam boat. This painting belongs to a specific category of Chittussi’s work aimed at large rivers, which he depicted not only as pleasant places for outdoor recreation, but also as pulsating arteries, reflecting their irreplaceable role for contemporary civilisation. Subject-matters of this kind have traditionally been very popular with the French art-loving audience, and therefore also with a number of painters. In this artwork, Chittussi developed, among other things, the popular Barbizon concept of shaping the depth of the painting using the diagonal of the river. Similar to some of his other works, the smoke on the horizon serves as a leitmotif, in this case coming from the steam boat, in other cases either from a factory chimney or a fire made of potato haulm. The overall romance concentrated in the figures of the villagers and their animals on the river bank thus blends with the reality of modern times and its most distinctive symbol in the form of a steam boat. The value of this work, which was until recently deposited in the Olomouc Museum of Art, is confirmed by its publication in literature (K. Novotný: Antonín Chittussi, Prague, 1939, repro. p. 25; Volné směry, 1938–1940, vol. 35, no. 1, repro. p. 27; R. Prahl: Chittussi, Prague, 2019, p. 260, cat. no. I 25) as well as its exhibition history (Czech Tradition in the 19th Century, SVU Mánes, Prague, 1938). It is indubitable that Chittussi’s painting of such dimensions and value has not yet appeared on the art market, therefore we consider it an exceptional and barely repeatable opportunity for collectors. The painting is presented in an elegant period frame. Assessed during consultations by PhDr. Š. Leubnerová and prof. J. Zemina. The expertise by prof. R. Prahl, CSc., is attached. 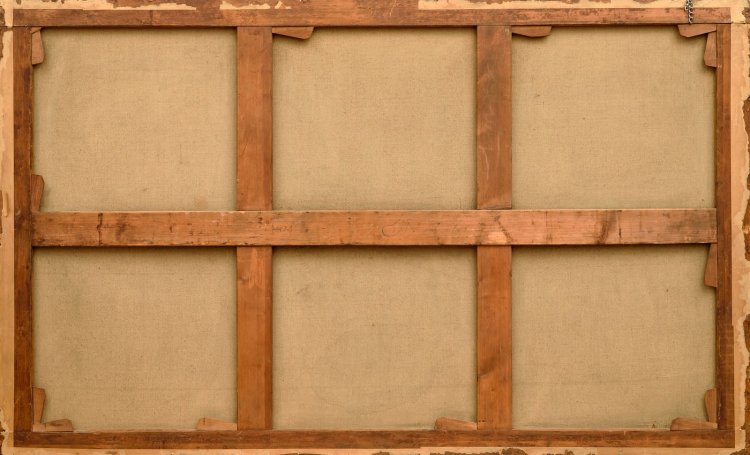