Gallery Kodl is an auction, sale and exhibition hall coming out from more than one hundred year family collecting tradition. It is focused on purchase and sale of paintings, drawings, graphics and sculptures of the Czech fine art of 19th and 20th century in commissions or auctions. Its major priorities are guaranteed sale of works of art and professional approach continued by Mr. Martin Kodl, the fourth youngest member of the family, a graduate from the Charles university and a sworn expert specialised in Czech art of painting of the 19th and 20th century.

Modern history of the company began in 1989 when Martin Kodl and his father as co-organisers organised the first auction in the modern history of enterprising at Prague’s Zofin, at that time under the original name Antikva Nova Kodl. Since 1989 the company has undergone several changes and modifications in connection with its expansion up to the existing form. Of the auction halls originated after the revolution the gallery ranks among those with the longest history and its owner, Mr. Martin Kodl has been active in this branch for almost thirty years. 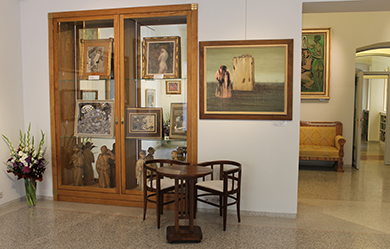 Gallery Kodl has already organised several successful sales. Among them undoubtedly belongs winning of several first places in the prestigious ranking ,,TOP 10” of the highest auction prices. In this unofficial competition, still under the name Antikva Nova Kodl, it has won the first place in the year 2000 by selling a painting by Emil Fila ,,Golden Fish at the Window” for 7,300,000 CZK, which was the highest price of a painting ever reached in Czech auctions and at the same time the highest price of Emil Filla´s paintings sold on world markets. In 2001 the gallery took the second place by selling a painting by Emil Filla ,,Still Life with a Mandolin” for 3,100,000 CZK and in 2002 it took again the first place by selling a painting by Toyen ,,Rose Spectrum” for 3,150,000 CZK. Also other precious paintings by Toyen (Marie Cerminova) were successfully auctioned off, eg. her painting ,,Oasis” for nice 2,900,000 CZK in 2004. Paintings by Frantisek Kupka from the famous Waldes picture gallery were also auctioned off at really high quality. ,,Steel Drinks” in 2003 for 4,450,000 CZK and ,,In the Garden” in 2005 for 4,600,000 CZK; ,,Female Nude“ was sold for 2,250,000 CZK in the same year. Since it was a pastel painting, the price reached was record breaking. The gallery had represented the Waldes family mentioned above for three years based upon an exclusive contract. Also successfully were sold paintings from the famous Morawetz collection or from no less renowned Preiss painting gallery. At the end of 2006 the gallery achieved a record auction sale of a painting by Jan Zrzavy in the CR by auctioning the ,,Wells in Locronan III“ for 5,500,000 CZK. In the following year the Emil Filla´s painting ,,Blue Still Life“ was auctioned off for 6,950,000 CZK. The highest price was reached by selling a painting by Jindrich Styrsky ,,Landscape in the Clouds,“ which, in 2007, climbed up to 10,250,000 CZK and it has become the author’s most expensive painting sold at Czech auctions. In 2009, an oil on canvas by Emil Filla ,,Glass and newspapers“ was auctioned off for a remarkable sum of 11,200,000 CZK and Jakub Schikaneder’s work ,,Late afternoon in a bay” for 5,600,000 CZK. The following year, the highest positions were reached by Toyen’s ,,Rest of night” with the sum of 13,200,000 CZK or Schikaneder‘s large format oil on canvas ,,Contemplation“ for 8,100,000 CZK which became thus the so far most expensive work by this artist. In 2011, the auction history was marked by Jindrich Styrsky’s ,,Black Pierot,” as it was auctioned off for 10,400,000 CZK, the rediscovered Jakub Schikaneder’s ,,Old Prague nocturne“ for 5,800,000 CZK and a monumental work by Emil Filla ,,Still life with a pipe“ has even become the most valuable art piece of the year with its sum of 12 million CZK. The following year, in 2012, works by this author realised several auction records – in the spring auction the oil on canvas ,,Lying woman“ was sold for 15,200,000 CZK and in the next auction his pre-war work ,,Three Graces“ for 14,600,000 CZK. It is also to stress that an important work by Josef Capek ,,King Lear,” whose final price was 6,300,000 CZK.

Twice a year, Gallerry Kodl organises an Auction Day jointly with Auction hall Vltavin taking place in Zofin Palace, on Slovansky Island. It also participates in organising benefit auctions with Charta 77 Foundation. In the autumn of 2005 a piano Petrof Opus was sold at the auction organised by Gallery Kodl for 2,810,000 which was credited to the BARIERY Account. It is a record sum on the Czech market for selling a musical instrument. Within the spring auction at the end of March 2008 a special auction of the BARIERY Account took place. A unique book by Josef Vachal ,,Gabreta dying and romantic,” the starting price of which was 1,200,000 CZK, was auctioned off for 3,100,000 CZK and has become the most expensive book sold on the Czech auctions.

Apart from organising auctions and exhibitions, the gallery also offers a permanent sale exhibition focused on Czech painting of the second half of 19th century and the entire 20th century. The Gallery Kodl resides in the newly refurbished premises of an Art Nouveau building, first reconstructed by the well-known Czech architect Osvald Polivka, with one of the largest exhibition spaces in Prague city centre – almost 400 m2. The Gallery began its activity here on 21st October 2014, exactly the same day as did Frantisek Topic 120 years ago, who opened here his first Salon on the 21st October 1894. The gallery has also its own parking place for its clients. 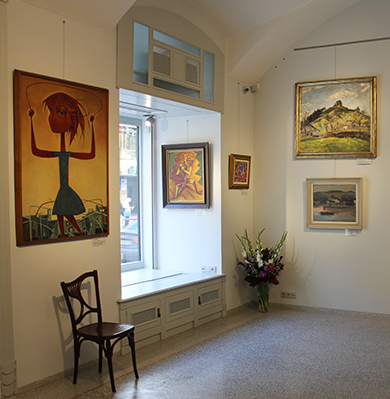 The Gallery continues here in its abundant exhibition activity. For instance, in 2000, the Gallery Kodl held an exposition ,,Emil Filla from the private collections,” in 2001 a sale exposition ,,Brno in Prague – paintings by Josef Kubicek, Janus Kubicek and friends.” In the autumn of the same year took place a very successful retrospective exhibition of Frantisek Kavan; in 2002 followed the exhibition of paintings by Otakar Schindler, the next year a sale auction of Ladislav Sutnar and in 2004 exhibition ,,Marak's school” accompanied by a publication from PhDr. M. Zachar and PhDr. M. Kodl. For its increasing popularity, this publication was re-edited in a larger form to celebrate the exhibition ,,Czech impressionism” in 2007. With a great help of Ms. Helena Spala was realised an exhibition in 2005 of Jan Spala, son of the famous father. It ensued thus a not less successful sale exhibition of Karel Vaca from the year 2004. For the summer period of 2008 the Gallery Kodl prepared an extensive retrospective exhibition of the painter Frantisek Ronovsky. The regular social events are the spring and autumn pre-auction exhibitions. Professional and intellectual supervision of these events is always perfectly carried out by the never ageing movie director Jan Kacer.

The second business section of the gallery headed by an expert in antiquities, graphics and classical photography, Jaroslav Kamenik, also deals with trading vintage jewellery, glass, china and furniture. The Gallery also closely cooperates with a specialised picture frame making family firm headed by a brother of the gallery owner, Jan Kodl. Upon request it is possible to agree expert consultations, expert opinions and analyses including restoration and chemical analyses of paintings.

Should you decide to visit the National Theatre, New Scene or Viola theatre, to stop by in the Café Slavia, to study in the library of the Academy of Sciences or simply to have a walk on the Narodni Avenue, we invite You cordially to our gallery which is located among these important cultural places, in the centre of education and entertainment. Thank you for your visit and we look forward to meeting you again!